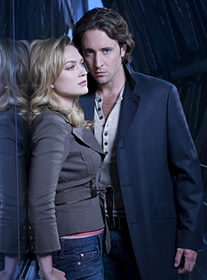 While promoting the upcoming Speed Racer film, Silver talked about Moonlight’s prospects for a second year on CBS. He said, “We’re hopeful… I mean, the next episode goes on next Friday night [April 25th], which is a really great episode. It starts out, Mick [Alex O’Loughlin] is still human, but then he has to go back to being a vampire. And I have three more really strong episodes. And I hope that it does come back, because we have a whole plan for next year that’s fantastic.”

The network has been on the fence about renewing Moonlight though it seems like the chances are good. Silver says that he’s scheduled to meet with CBS programming executives to talk about the show’s future. “Well, we’re going to go in, as a matter of fact, next week for a pitch meeting to tell them what we’re going to do next year.”

Based on what the programmers hear and the performance of the new episodes, they’ll decide whether Mick St. John will return to walk the streets of Los Angeles next fall. CBS announces its 2008-09 schedule in mid-May. Stay tuned!

I think that it would be advised to bring Moonlight Season 2 for all of that love the show.

is there a 2nd series? I watched the series on dvd, and can’t get enough. I want more…

I hope they will bring it back, it’s a good soap and i like it

i’ve watched d season one and i give kudos to you guys for the good work you have done on that film. am going to start the season two very soon with the hope of enjoying myself and learning news things about vampire, especially when they are in love with mortal beings(human).well done…………………………

adeyemo ferary: You do know that there is only ONE season right? So how you can start watching the second season very soon? lol Your statement makes NO sense what so ever but thanks for making me laugh lmao

I hope they bring “Moonlight” back. I just started watching it this year and I loved it and I want to see more of it!

I really hope they bring it back!! I haven’t seen one bad comment about this show. Do you think CBS reads this? I hope so! PLEASE BRING IT BACK