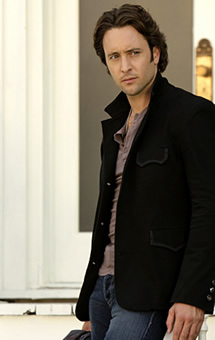 Over the weekend, CBS Entertainment President Nina Tassler confirmed that the Three Rivers TV show had indeed been cancelled. Now that Alex O’Loughlin is finished with that series, does that mean that Moonlight will be coming back?

Though Moonlight had decent ratings and a devout group of followers, CBS decided to cancel the series after just one season. The network wanted to stay in business with O’Loughlin however and that eventually led to him being cast in Three Rivers.

While some Moonlight fans followed O’Loughlin to the new series, many didn’t. Some people who have posted to this site have said that they refused to watch Three Rivers in hopes that this would somehow convince/force CBS to revive Moonlight.

Now that Three Rivers has been officially cancelled, will Moonlight be back? While Tassler proudly takes credit for being ahead of the current vampire craze, she says that the network has no plans to revive the little-watched cult favorite.

Despite his show’s low ratings, Tassler does still believe in O’Loughlin’s talent and said, “We’re trying to find something for him.”

What do you think? What kind of role would you like to see O’Loughlin take on next? Do you think Moonlight is a help or hindrance to his career? Is the role that helped make him famous actually stifling his career?

Bring moonlight back! it was so awesome i mean it was a mixture of CSI and supernatural put togther just absolutely brilliant!!!!!!!

I thought Moonlight was so good…better than Vampire Diaries and True Blood…that I continue to watch the reruns over and over. It isn’t just because of Alex O’Loughlin, either. Althought he was good, much more credit has to be given to Sophia Myles. And the storyline is great! I can’t believe that the show was cancelled after just one season. If it ever comes back, I hope they use the same actors in the various roles…especially Sophia Myles and Alex O’Loughlin.

Moonlight was an interesting and captivating series. I don’t think CBS would be disappointed bringing it back.

i love love love moonlight. my fave show. cried for days when it was cancelled. so mad.

i loved this show so much. i never missed an epi. i plan on watching it on the cw. i would be so so so happy if it came back for a 2nd season. one of the best shows that came on tv. love it!!!

Yes, yes, yes, bring back my favorite vampire guy of all time! I know he is appearing on Hawaii Five O but please, please, get him back into Moonlight. It is the coolest. We love you Alex O, Vampire of Vampires.

I watched moonlight when it first aired and loved it. Some people may not have but with the recent “Vampire Craze” you never know how many veiwers CBS could get. Just put the word out about the show, and let people know about the show.

I would love to see Moonlight back I thought that Mick and Beth really worked good together so that made Moonlight even better than ever. But Alex O’Loughlin would be good in anything he does. I watched Three Rivers, it wasn’t as good as Moonlight but it did it for me. It was actually starting to get good and then they took it off. Alex will do good no matter if he stays with CBS or not. I am thinking CBS might be the one that makes bad decisions, just when you get to really love the show CBS takes… Read more »

I totally love vampire series and Moonlight is one of my favourites!!Bring it back with a 2nd season,please!!!

For all who do not know Moonlight will be on the CW June 3, at 9PM Thursday all summer just before Vampire Diary’s !!!! 🙂 🙂 🙂 Now isn’t that wonderful news!!! They announced it last week and I can only pray that the reviews are through the roof. DON”T FORGET TO MARK YOUR CALENDARS, it’s all over the Moonlight web sites and Workdwidemoomlighters are still writing letters to Warner Brother for a Moonlight movie. Me, I’d love a movie but to be back on the TV would be more my choice. Maybe CBS is really noticing the bobo they… Read more »

I am fan of vampire and action series and I have to admit that moonlight combined both and that is why up to this day, is still one of my favourites. Now that there is a tendency of new films and series with vampires I think that is the greatest period for moonlight to resurrect. Please reconsider it!

Moonlight is the best vampire show ever! Bring it back!

Bring moonlight back, vampires are all the rage and its the best vampire series