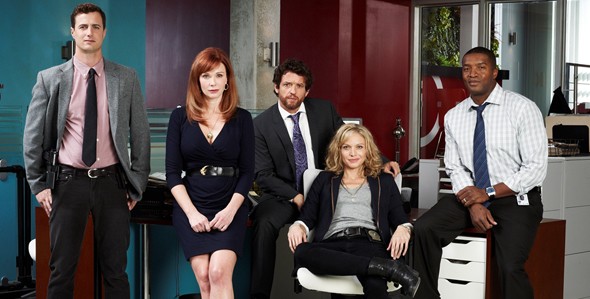 TV show description:
This crime drama has a unique twist in that it doesn’t focus on who committed a crime, but why the crime was committed in the first place. As the mystery unfolds, winding between revealing flashbacks and present time, viewers navigate the twisted and complicated maze of each murder, solving the puzzle alongside the detectives, piecing together more of the mysterious connections that drove the killer to commit murder.

When a murder is committed, Detectives Angie Flynn (Kristin Lehman) and Oscar Vega (Louis Ferreira) are on the case, looking for clues that will lead them to the killer.

Sexy and feisty, Angie is a thirty-something single mom from the wrong side of the tracks who proves that appearances can be deceiving. Oscar is intelligent, thoughtful, methodical and confident. He comes from a wealthy family and turned his back on an expensive Harvard Divinity School education to join the police force (a change of heart from his initial choice of joining the priesthood).

Others on the homicide team are: Doctor Betty Rogers (Lauren Holly), a medical examiner with a quirky sense of humor that belies the grimness of her daily job. Staff Sergeant Boyd Bloom (Roger Cross), the Squad Room Supervisor who was sidelined from the streets a few years earlier by a bullet. Detective Brian Lucas (Brendan Penny), a young eager beaver detective and newlywed who’s eager to learn and is fascinated about the often grisly procedures.

Angie doesn’t suffer fools or authority figures lightly. At home, Angie only wants the best for her teenage son, Manny (Cameron Bright), who is one of the few things in life that she feels she did right. But as far as Manny’s concerned, being the son of a cop is not the easiest gig in the world.

Series Finale:
Episode #52
This TV series has not ended yet.
First aired: TBD

What do you think? Do you like the Motive TV series? Do you think it should have been cancelled or renewed for a fifth season?

I LOVE THE SHOW MOTIVE AND WISH IT WAS RENEWED!!!!!!

Please renew. I love this show–look forward to watching it every week.

I love this show. It is one of the few original and compelling mystery shows. I do not understand why it was not renewed. Even though it was at 11 pm I would stay up just to watch it. You guys SCREWED UP when you cancelled it. And yet, you persist launching inane scary shows and shows representing comic books and stupid ” non- reality” ” shows”. You guys really do suck.

I love the show – they always take away good shows

I LOVE this show! It seems ALL the good ones get cancelled. LOve the concept of this show knowing the killer but trying to figure out the why! LOVED the chemistry between the characters! I followed it when it was picked up by USA channel (and THANKS to that network for doing that) but for some reason they changed the time from 10 PM to 11 PM and I missed a few episodes. PLEASE PLEASE renew!

Should be renewed!! I love this show. It’s a great show. It’s Funny and not gory. It’s great

Should NOT be cancelled–excellent show!

This is one of the best shows on TV. Should definitely be renewed.

Love this show – watch it every week

It needs to be renewed again. I loved the show and liked the characters.

Glad show was cancelled enjoy it until Tommy Flanagan ruined it!
His character was annoying & rude!!!

should be renewed, I love this show