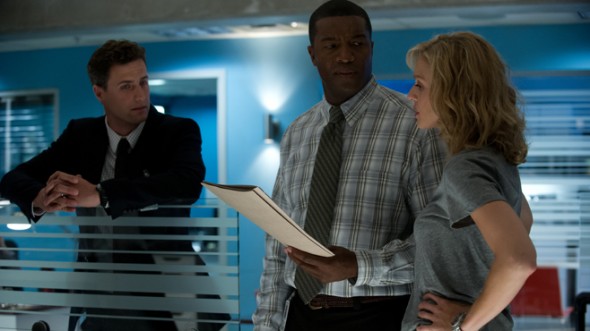 The alphabet network has been airing a new Canadian drama on Thursday nights. They found ratings success with Rookie Blue but is this new show also worthwhile? Should it be cancelled or brought back for a second season?

Motive follows Angie Flynn (Kristin Lehman), a single mother and Vancouver detective who investigates the motives of killers. Each episode starts with the crime and shows viewers what led to it. Others in the cast include Louis Ferreira, Brendan Penny, Lauren Holly, Cameron Bright, and Roger Cross.

The series debuted on ABC at the end of May and drew a 1.3 rating in the 18-49 demographic with 6.52 million viewers. Those aren’t very good numbers and the ratings have gotten worse as the weeks have progressed.

This past Thursday, Motive hit a new low and registered a 0.7 demo rating with just 3.95 million viewers.

Motive is produced in Canada for CTV and, despite decling ratings, was renewed for a second season back in May. It isn’t performing very well for ABC but, like Rookie Blue, it’s not costing them very much either.

If the ratings declines continue, I suspect that ABC won’t bring Motive back next year. They surely aren’t satisfied with the show’s numbers and would prefer to gamble on trying something new. NBC has dropped several Canadian shows over the years because of low ratings, despite their having a lower cost.

What do you think? Should ABC air season two of Motive or should they drop the series instead?

I would show Motive in the US. It was a good show.

I/we just love love love this show. I/we would. Be so super upset if it went off air so please please don’t dissapoint

Motive…..love this show. Looked forwarded to seeing it each week. will be sad if it is not renewed. Hiltrude

I really like this show even though we know who done it at the start.

love it, keep it coming

Hate this show! I want to figure out who did it!