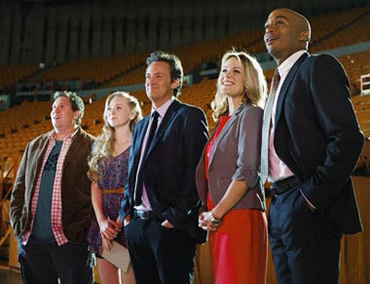 On Mr. Sunshine, Perry plays Ben Donovan, the Manager of Operations at San Diego’s Sunshine Center sports arena. As he turns 40, Ben finds himself navigating though a seemingly never-ending series of bizarre requests, curious mishaps, and employee screw ups. It doesn’t help that he has a crazy boss (Allison Janney), sleeps with his marketing director (Andrea Anders), has a crazy new assistant (Portia Doubleday), and must put up with his boss’ less-than-skilled son (Nate Torrence). Ben’s best friend (James Lesure) works with him as well but also has a relationship with the marketing director.

The ABC sitcom debuted on February 9th to a healthy 3.7 rating in the 18-49 demographic and 10.52 million viewers. That was an improvement of 37% over the last original episode of Cougar Town in the timeslot.

Right now, Mr. Sunshine is averaging a 2.7 rating and 7.61 million viewers. Based on the current ratings, it looks like the season will end up averaging about a 2.4 rating. That’s not great but puts the series in the middle of the pack. With the exception of Better with You, all of the ABC sitcoms are performing better (and have been renewed for next season).

ABC could go either way on this one but a renewal looks fairly likely. In the past, the network has renewed one or two shows that were on the bubble. This one would seem like a good choice if they still want to do that.

Cougar Town is averaging a 2.9 rating so, if ABC does decide to renew Mr. Sunshine, it probably won’t be back in the same timeslot — or maybe it could. However, at the recent TCA Winter press tour, ABC Entertainment Group President Paul Lee indicated that he’s interested in the network starting a second night of comedies. Mr. Sunshine could certainly help fill one of the timeslots, either on Wednesday or on a second night.

What do you think? Is Mr. Sunshine worth renewing or would you rather it be cancelled? Cancel or keep it?

I really like this show. I would give James Leisure more to do, but other shows that started a bit slowly Friends, Big Bang Theory, both gained an avid audience. I really enjoyed Studio 60 on the Sunset Strip and they cancelled it way to soon.

KEEP!! Mr. Sunshine Is A Great Show. Plus It Just Gets Better And Better As It Goes. Just Give It A Chance. Let It Get Warmed Up Before You Ditch It.

CERTAINLY KEEP IT AND MODIFICATE IT

Absolutely keep it. Well cast, good acting, good writing. Allison Janney is a scream as the over-the-top owner. Having said that I like it, I have doomed it, I am sure. Like “Better Off Ted”, it rarely goes for the easy, cornball, slapstick laugh. Perhaps Veridian Dynamics could be persuaded to become the sole sponsor.

PLEASE KEEP THIS SHOW ABC!!! I enjoy this show so much and i think it could go on to be one your most popular shows ever. The cast are all really funny and play their parts very well. I have to say that i would be very disappointed if Mr. Sunshine isn’t renewed for at least a coupke more seasons. Let the show grow.

I say keep it! It does need slight re-tooling. Someone suggested bringing in a live audience and not necessarily showing all aspects of the arena. Which I think we need a live audience comedy, what happened to real comedies!

Aside from that. I think the show is extremely funny, but could use a little freshening up. Hopefully it renews and it works out!

Its really good and keeps you entertained. Could be better but so could TONS of other shows. This one will find its way. Gotta KEEP it.

Cancel it. It’s not funny. It tries SO HARD to be funny, over-the-top funny, which is tedious and boring. The characters are dull and none of them are likeable. Dont’ get me wrong, I love Matthew Perry and think he’s really talented but this show has got to go. It’s doesn’t do Matthew justice! He would do well behind the scenes of another sitcom.

Absolutely Renew.At first I was luke warm to the show,then I became a fan.I think it’s witty and very funny.ABC owes us for canceling ” Life With Bonnie”.

Keep it! Great cast, some side splitting moments( Allison Janney answers the phone that’s not ringing) the potential is there

Love the show, much better than Rules of Engagement, Cougar Town, which is Friends with a new cast. Keep the show.

KEEP IT. I THINK IT IS FUNNY. WITH ALL THE OTHER CRUDDY SHOWS ABC KEEPS, AND THEY WANT TO DITCH THIS ONE. RATINGS STINK BECAUSE IT HAS FOLLOWED ALL RERUNS.

Keep it!! Allow the writers and Matt to do a slight re-tooling, hell, other shows with this amount of talent were given that chance. Even FRIENDS was a snoozefest the first 3-5 episodes. Each show must adjust, don’t just throw something out without trying to tweek it.

Cancel it! Its really stupid and not funny. Its a shame because they are all talented actors. Maybe a new crew of writers could make a difference!

I thoroughly enjoy watching Matthew Perry and all the actors on Mr. Sunshine. I think the show is great and they should renew it! Definitely a funny show and always entertaining!!