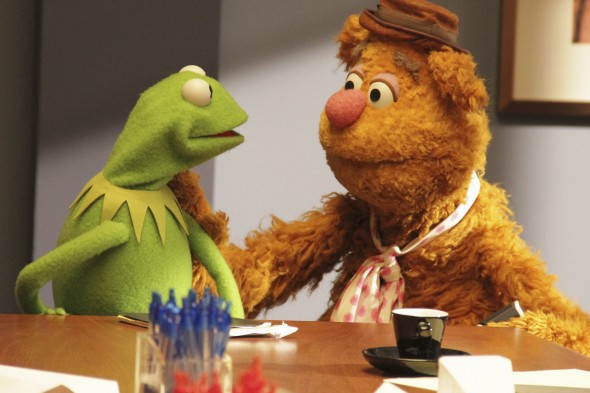 Tonight marks the season finale of The Muppets on ABC. The network wasn’t happy with the new Tuesday night series’ ratings in the fall so they replaced series showrunner Bob Kushell with Galavant’s showrunner, Kristin Newman. Newman made some changes to the series but they don’t seem to have made a difference. The ratings hit new lows when the show returned from its winter hiatus.

With such poor ratings, you’d think that The Muppets would automatically be cancelled. However, Disney owns the Muppets characters so the corporation (which also owns ABC)  has a vested interest in keeping the show on the air.

We likely won’t know the show’s fate until May when the networks announce their plans for next season.

But, what do you think? Do you think that The Muppets is worth renewing for a second season?  Should it be cancelled instead?

The show was pretty good last fall, with a few good laughs, but it is very good this winter. Please renew! Original shows like this are far and few between, while ridiculous shows like Criminal Minds, Grimm, CSI, NCIS, Bones and Supernatural merely repeat the same thing over and over (and over), yet stay on the air for years.

IT’S actully “Few and far between”, not the other way round.

Renew this show! It’s refreshing to have something funny and not another fake dramatic “Reality” show

Do not cancel the Muppets show …It’s the best show on television. They deserve a 2nd season.

Go Season 2! Season 1 went from horribly cynical to becoming a gem. Though saddled with last fall’s painfully executed story concept, the reboot was basically a success. These past several episodes I’ve been saying, “Yes! That’s the Muppets I grew up with and love.” It can only keep getting better from here. The only shame is that ended early.

The first episode was terrible, I thought I was going to hate it BUT RENEW PLEASE! It’s headed in the right direction

I like to new revamped version that came back after winter break!! KEEP IT!!!

I absolutely love this show! Please do not cancel.

RENEW IT. They better improve it since the show runner change that happen heading into the second half of the season.

I liked the first part of of the season better, before they “fixed” it. I thought it was a lot funnier. Still good, though. Hope they renew it.

Renew it, but improve it. I love the characters, but i can’t get into “The Office” feel of the show. I still have watched every episode, for the characters. Bobo and Pepe are my favorites.

I LOVE this show. Sometimes I watch episodes multiple times, I love them so much. I really don’t understand why it isn’t doing well.

I hate to say it but … pull the plug. It’s in a really bad time slot against NCIS, which all but rules Tuesday night.

So change the timeslot, don’t cancel the show. There’s nothing but crap on Friday nights, and families are home. It’ll do better.

Make it part of TGIF?