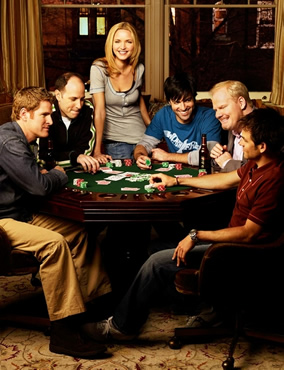 No season five for PJ and the guys. As expected, TBS has cancelled My Boys after four seasons on the air.

It’s been suspected for awhile that TBS wasn’t going to bring the show back for a fifth season but the cable channel wouldn’t confirm it. Speculation was that TBS execs feared that, by admitting the show was ending without a true series finale, not as many viewers would tune in. As it is, an average of only 784,000 people tuned in to see the last two installments.

That decision ultimately cost Spiro and Howard jobs on new NBC shows, Love Bites and Perfect Couples. They were under contract to TBS and NBC wasn’t willing to risk having to recast and reshoot if the cable channel brought My Boys back. Jim Gaffigan left after last season to focus on his stand-up.

What do you think? Are you satisfied with the way My Boys ended? How would you wrap up the series?

So disappointed that My Boys was canceled! It was a great show. I really looked forward to watching it in the summer. Now there are no good summer shows for 2011 with Mad Men delayed and My Boys canceled…

Wow!!!! This sucks I have been looking for somekind of listing and finally visited the TBS website looking for some kind of clue on when it would return and got nowhere. Then started searching and found out it was cancelled. Please bring it back……

I’m so disappointed. I loved this show and even got my husband watching it…Such a bummer!

soooooo bummmmmed…please bring back season 5 to at least wrap up the lives of the characters I fell in love with!!! Had a feeling when I saw Jordan on Harry’s law..good 4 her, but need CLOSURE!! So sad….Maybee

I Loved my boys that was my summer show!

I have been waiting for a new season of “My Boys,” and to my dismay, discovered that it had been canceled. I thought is was a clever show with lots of laughs. I looked forward to watching it each week, during it’s short seasons. Why do stations always cancel the good shows and leave the not-so-good shows??

I’ve been waiting for P.J. and the guys to re-appear and brighten up the summer viewing schedule. So sad to hear that some bonehead executive could not see the forest for the trees. The writing was great, and the players were totally believable.

Someone made the comment that the writer should move to another network. I agree! How ’bout USA? My Boys could join their line up of shows featuring quirky characters that we love to watch!

Autumn Lehman is so right. The writer should go to another network… C’etait une vrai bonne emission…

[…] Newton. Jordana Spiro’s role had to reduced because of a previous commitment to TBS’ (now-cancelled) My Boys. Love Bites’ creator, Cindy Chupack, also decided to step down as showrunner. NBC […]

I am SO bummed!~!!!! Why is it the good shows gets cancelled but, the dumb shows get to stay???!!! This is acutally one of the few shows my husband & I watched together……They could have at least finished out another season with a finale…geez!

Sorry to hear this fun show has been cancelled, I was just checking to find out the new schedule and saw TBS ended this great summer show. To bad, it was a winner !

I agree …. I was checking around to see when the show would be returning. Bummed it was cancelled!

LOVE THIS SHOW….so sad that it’s not returning. It was one of the few summer shows my husband and I both shared interested in.

I’m so sad to learn this show was canceled. It was SO good. I could totally relate to PJ in being the only female amongst a group of guys, and how even though she was still very feminine she didn’t go nuts for all the typical girly stuff. The bantering between the characters was so funny – the writing was terrific and the story lines always kept me interested (I especially loved the Ode to Project Runway with the shirt-making contest. Love Mike’s comment about all you need is some fabric, a needle and some string). I will miss you… Read more »

that is a great show!!!!!!! come on brendan and pj have 2 be together ugh come on you should have at least let them finish

I Lovev, Loved, Loved My Boys! I even got my whole family into watching the show. Next to Opening Day, I loved waiting for the next season to start. So sad and not happy. It was the OLY show that I watched on TBS. At least there’s always USA and PSYCH. Really poor move by TBS.