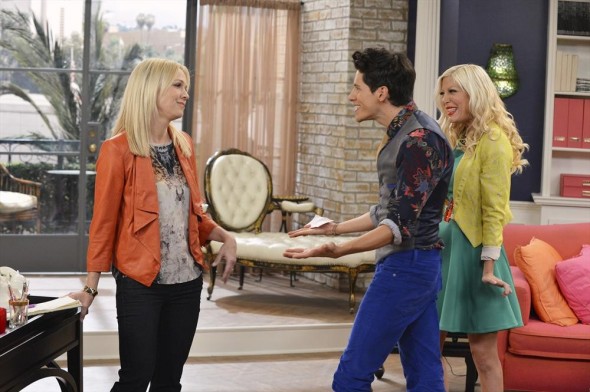 Jennie Garth and Tori Spelling have both been part of successful TV shows in the past but how’s their new comedy Mystery Girls doing on ABC Family? Will it be cancelled or renewed for a second season?

Mystery Girls follows a pair of former stars (Spelling and Garth) of a 1990s detective TV show as they open their own investigations agency in Beverly Hills. Miguel Pinzon plays their enthusiastic superfan and receptionist.

The 10 episode season ended on Wednesday and it’s the cable channel’s lowest-rated scripted series. Based on the low ratings, it’s highly unlikely for ABC Family to order a second year.

But, what do you think? Do you like the Mystery Girls TV show? If you ran the network, would you cancel it or rework and relaunch the series for a second season?

Bye bye. There isn’t any way to make a show starring Tori Spelling a watchable show.

I think this show is so funny . I love it and shouldn’t cancel it.

At first I found this show stupid after only episode…

But then I watched two more episodes and that made me see the funniness and cuteness of this show.
Its problem might be that it doesn’t have only one target audience, but that can also become a strength if they renew it,
It’s charming, cute and entertaining, please renew it

I love this show. Please renew the show!

Renew show I enjoy it a lot renew please

First off let me say that im 51 years old and watch commercials and have money to spend. At first i thought the show was a little too silly but i record all the shows and ususlly watch them with my husband. Its really a happy show and im enjoying watching it. So cute and fun.

First off let me say that im 51 years old and watch commercials and have money to spend. At first i thought the show was a little too silly but i record all the shows and ususlly watch them with my husband. Its really a happy show and im enjoying watching it. So cute and fun.

It doesn’t matter if they renew this one or not for me because I will not be watching it anymore. I tried to like it because I was a huge fan of 90210, and I wanted it to be good, but it was just too bad. Tori Spelling should not be acting. She did an impression of Chewbacca that was cringe inducing, and the fact that it made it on the air tells me that there is not much in the way of quality control on that set. The acting was at the same level as the twelve year olds… Read more »

OMG this was excruiatingly bad. The show was dumb, silly and badly acted and both Garth and Spelling should have been extremely embarrassed for appearing in what has got to be one of the worst tv series ever broadcast. Cancel it and burn the master tapes for all of the first season episodes.

I would give it a second season I really liked watching it and I prefer sitcoms not reality TV we need to get back to rhe funny sitcoms and this show has that for sure.

No, it wasn’t the BEST show on tv & I thought Tori Spelling was trying too hard to be funny…but it was good, clean, family entertainment. There aren’t many good sitcoms left and the networks need to STAY AWAY from reality shows. Thankfully ABC Family is still one of the last networks that actually shows sitcoms. Maybe I just miss the old days of 90210, but I enjoyed seeing this show.

I think the new show Mystery Girls is a great sitcom and really funny. I think they should keep that show on. Bring back the Micheal J. Fox show and The Kristy Alley shows. They are all funny shows and it sad that the Micheal J. Fox show is not on anymore and netheir is the Kristy Alley Show. Those are all my favorite shows and should of kept them on. And keep Mystery Girls on too I think it’s funny. And please bring back the Ballet comedy that use to be on The family channel too. That was a… Read more »