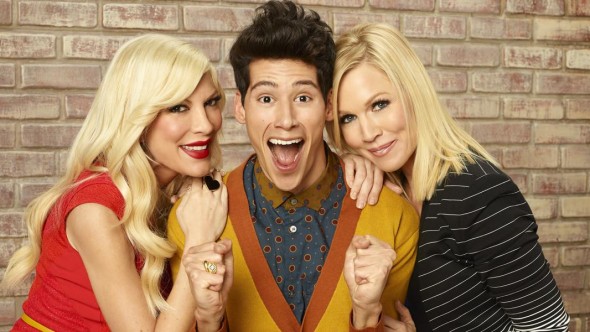 TV show description:
This comedy series revolves around the former stars of a fictional 1990s TV show — also called Mystery Girls — who are reunited because a real-life mystery.

Holly Hamilton (Tori Spelling) laments the fact that she used to be famous and on a hit TV show. Some 14 years after the show ended, Holly is desperate to regain her former fame.

Her former co-star, practical Charlie Contour (Jennie Garth) is now a suburban housewife whose life is filled with juggling her husband, daughter and household duties. She has little patience for anything that takes her away from that life.

Gay and vibrant Nick Diaz (Miguel Pinzon) has just moved from Ohio and has already witnessed a murder in Los Angeles. A super-fan of the old Mystery Girls TV show, he refuses to give a statement to anyone but his two favorite “detectives” so the cop in charge of the investigation arranges for that to happen.

This reunites the former co-stars and Holly comes up with the crazy scheme to partner with Charlie to open a real detective agency. Charlie’s against it until sees that the new venture may help up her cool factor with her daughter.

Having saved her TV money, Holly’s able to afford the pricey rent in a Beverly Hills office. Enthusiastic and excitable, Nick persuades Holly (who’s totally on board) and Charlie (who has serious doubts that he’s qualified) to hire him as their assistant at the new detective agency.

Series Finale:
Episode #10 — The Killer Returns
Nick freaks out when he learns that Zanucci (Anthony Bonaventura), the murderer in the mob hit he witnessed, has struck again. Worried about his safety, Nick must admit that the mobster knows he saw everything and can now find him, thanks to the new Mystery Girls commercial.

Holly and Charlie find Zanucci at a local spa and turn him over to the cops, confident that Nick is now safe and Holly can concentrate on her efforts to snag Detective Duane (Ryan McPartlin). But when the detectives return to the office, they discover the case isn’t quite solved and they must act quickly in order to save their loved ones. Meanwhile, when Charlie’s husband Michael (Adam Mayfield) hears she’s hunting a killer, his concern for her safety prompts her to consider a different path.
Courtesy ABC Family.
First aired: August 27, 2014.

What do you think? Do you like the Mystery Girls TV series? Do you think it should be cancelled or renewed for another season?

I have never been a fan of Tori Spelling BUT…she is a riot on this show. The walk, the hair…in fact, the whole package is “over the top” much in the style of Lucille Ball. Had no idea she could take on comedy with such finesse. Jennie is great as well. It must be like old times for the two of them. Know they must be enjoying themselves as well. Miguel seems to be “overacting” much of the time. Flamboyancy has a place, but the “gayness” is too much “in your face”. Girls, keep up the good work!

I love MYSTERY GIRLS. It is an enjoyable spoof. I look forward to it each week.

This shows does need improve, but I watch it. I love Nick character. They are amazing actors. It is not easy being an actor, if it was everyone would be doing it.

You know what? I love Tori Spelling and I love this show. I look forward to it every Wednesday night. It is lighthearted, funny and something my 12 year old can watch with me. It’s not dirty, not a reality tv show (thank goodness). All there seems to be on tv anymore are reality shows. I love this show and hope it is renewed for many more seasons.

This show is a joke, I cannot even believe it is on tv, please cancel it.

I like this show even though at time s Tories character can come off a tad annoying I enjoy watching how her and Jennie’s character interact with each other. Not to mention Nick is hilarioud. Love him! Please give this show a second chance. I’m tired of shows I like getting canned before they he a chance. One word. Bunheads. Even though I’m sure you have already made your decision I’m hoping you’ll reconsider.
Thank you
An ABC Family fan

ABC Family totally messed up… Airing #3 first just to confuse people? Or was it an attempt to entice us to watch the next 3 episodes? I faithfully watched all of the first aired episode, never laughed once, was shaking my head most of the time wondering how such nonsense make to the airwaves at all! Ever so optimistic after hearing about the rearrangement of episodes, I decided to give the second airing a chance, I turned it off after 10 minutes. It reminded me of a bad sci-fi 50’s show where nothing was logical. But it this educated era,… Read more »

I love this show. I saw the first four episodes and enjoyed the way the character’s back story’s were developed. I enjoyed how they play sexy, clean/dirty and make fun of pop culture.

I found myself laughing out loud while I was watching the shows at work over the weekend.

It’s light and not heavy. I would rather have this show on during dinner time rather than 8:30pm.

Wow, peoples standards have completely gone out of the window and the fact that this show even made it to air proves it. This show needs to be cancelled immediately, total waste of time. The acting is beyond horrible and the writing is ridiculous. Moving on!

This show is not totally unfunny, it’s just highly inappropriate for children, too raunchy and too much sexual innuendo. It doesn’t belong on ABC Family

Waste of air time and money. This shows why television programming in the toilet.

Give it a chance. God. There’s only been 3 episodes. I think so far it may be a little raunchy but come on its not like any of the other shows don’t show some inappropriate scenes. Its a reason its rated tv-14. I think the show just needs some time to adjust to. I for one am excited to see what this series can come up with.