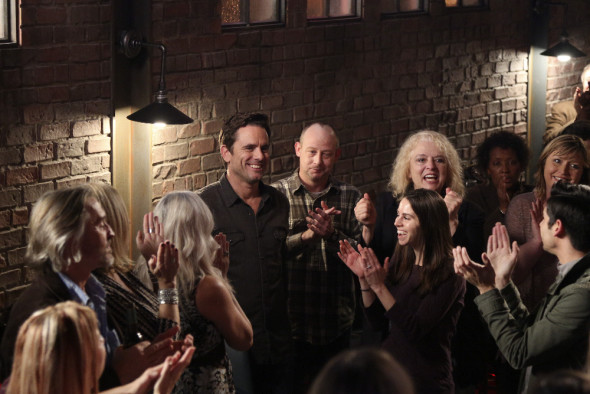 Nashville fans, this news will be music to your years. A fifth season renewal for ABC‘s Nashville TV series is looking a bit more likely. TV Line reports Marshall Herskovitz and Ed Zwick have signed on as Nashville‘s new showrunners, “…in the very likely event ABC renews the bubble drama for Season 5.” Herskovitz and Zwick’s last TV series was the web/network hybrid quarterlife TV show, which was cancelled by NBC after just one episode aired.

Nashville was not among ABC’s fifteen lucky series that got an early renewal on March 4, 2016. Its spring mid-season premiere on March 16, which featured the long awaited wedding of Rayna James and Deacon Claybourne (Britton and Esten), earned 0.91 in the 18 to 49 year old ratings demographic, which is a 9.86% increase over the mid-season finale. The mid-season premiere episode drew a total audience of 4.220 million viewers, which is an increase of 2.01%, compared to the winter finale. Stay tuned to TV Series Finale, for this week’s Nashville ratings.

In addition to My So-Called Life and quarterlife, Herskovitz and Zwick created the thirtysomething, and Once and Again television series. Per Ausiello’s TV Line report, should the fifth season of Nashville come to pass, it will be the first TV series the duo has worked on as showrunners, that was not of their own creation The report notes that ABC declined to comment on the story.

Do you think Nashville should be cancelled or renewed? Vote in our latest poll. Make your voice heard.

What do you think? Are you a fan of ABC’s Nashville TV show? Do you expect it to be renewed for a fifth season? Will you be upset if Nashville is cancelled? Tell us!

What were the execs thinking at ABC? Great show’ great cast and especially great music.

I was so disappointed the show was not renewed. Nashville was one of my favorite shoes and looked forward to it every week! It did come on too late for me to watch but I always watched ever episode with anticipation on Comcast on demand! Please bring it back!

want it back asap, great musical production and songs and actors…

I love this show. It is my favorite and I love the music. Please bring it back next season.

Nashville is my favorite show. I am very upset to hear it has been cancelled. Great acting and music. I think there’s many more storylines they could have come up with. Please come back for a fifth plus season!!!!