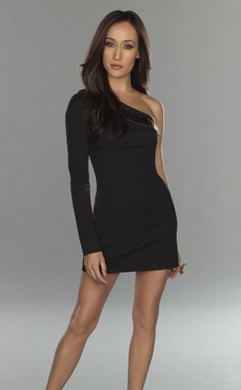 TV show description:
As a deeply troubled teenager, Nikita (Maggie Q) was rescued from death row by a secret US agency known only as Division. They faked her execution and told her that she was being given a second chance — to start a new life and serve her country. What they didn’t tell her was that she was being trained as a emotionless spy and assassin. Still, throughout her grueling Division training, Nikita never lost her humanity and even fell in love with a civilian.

When her fiance was murdered, Nikita realized she’d been betrayed by the only people she thought she could trust. As a result, she did what no one else had been able to do — she escaped. Now, after three years in hiding, Nikita is seeking retribution and makes it clear to her former bosses that she’ll stop at nothing to expose and destroy their covert operation.

Meanwhile, Division continues to recruit and train other young people, erasing all evidence of their former lives, and turning them into cold and efficient killers. One of these new recruits is Alex (Lyndsy Fonseca), a beautiful girl with a violent past. Her story’s not so different from Nikita’s. Following her parents’ murder, Alex’s life completely fell apart. She ended up drug-addicted and homeless until Division “rescued” her and brought her into the fold.

Division’s top authority is Percy (Xander Berkeley). He spent years being a good government soldier, taking his role as an insider and using it to turn the secret organization into a lucrative spy-for-hire shop. With Nikita gone rogue, Percy will do whatever it takes to destroy her and protect the empire he’s built.

Percy often turns to his top lieutenant, Michael (Shane West), for help. Michael trained Nikita when she was a recruit and is now faced with the responsibility of tracking down his renegade student. At the same time, Michael is in charge of training Alex, Nikita’s young replacement, along with other recruits, including Thom (Ashton Holmes), who has been at Division for a year and is anxious to prove himself, and Jaden (Tiffany Hines), a beautiful and tough young woman who challenges Alex at every turn.

The recruits all spend part of their training with Amanda (Melinda Clarke), a master manipulator who can turn any ugly duckling into a swan and any bleeding heart into a killer. Her use of psychological warfare and strategy is key to Percy’s entire operation. Amanda has only had one failure during her tenure at Division — Nikita.

Nikita also left her mark on Birkhoff (Aaron Stanford). He’s a nonconforming computer genius who was caught hacking into the Pentagon’s system from his college dorm room. Birkhoff was recruited into Division at the same time as Nikita. He never admits to anyone that he misses his former colleague, and he has managed to hold onto his own rebel spirit, his geek-speak, and his slacker dress code.

Alex now finds herself facing the world of Division every day. She is just beginning to understand what lies ahead for her and why the legendary Nikita made the desperate decision to run.

Series Finale:
Episode #73 — Canceled
In a flashback, Nikita is shown as a vulnerable teenager who first entered Division causing chaos in her wake. In the present day, Birkoff, Owen/Sam, and Michael persuade the Senator to let them out of US custody to capture Nikita and Alex — before Nikita destroys the world out of revenge.

Nikita and Alex travel to a secluded house in Washington, DC where the Group is meeting. Once there, the pair start to eliminate the remaining clones (against Michael’s wishes). They then obtain a list of all of the doubles and release it to news outlets and Birkhoff’s secure server.

Nikita, Alex, and Birkhoff are arrested and confined to a maximum-security prison. Amanda visits Nikita to say goodbye but events take a surprise turn. Nikita breaks free and puts Amanda in her restraints. Nikita tells Amanda that she and Alex used tranquilizer bullets instead of live ammunition on all of the doubles. No one was killed and Michael and Sam are releasing the real officials.

Nikita explains that her main goal has been to come face-to-face with Amanda and to kill her. However, Nikita has changed her mind and would rather let Amanda suffer by being imprisoned for life — never to be heard from again. Nikita leaves, saying “Welcome back to the basement, Helen.” (a reference to her childhood as the subject of her father’s inhumane experiments).

Moving into the future, we see Birkhoff release Shadownet to the general public to safeguard them from the government’s prying eyes. Alex and Sam tour the country as spokespeople. We then see that Nikita and Michael are happily married and living on a beach in Ecuador. They continue to work on their own small missions together.
First aired: December 27, 2013.

What do you think? Do you like the Nikita TV series? Do you think it should have been cancelled or renewed for a fifth season?

It would be nice to re-ait the series finale for those of us diehard fans who missed it.

Nikita , I Loveeee The Show I Really Hope they Renew It , Don’t Miss Out ,
Nikita is The Best , So Dnt Cancel It ! I literally dress everyday because of Nikita’s Wardrobe ! I need More of the Show .. It hasn’t ran its Course

Awesome show I love this one!

I don’t think it should have been cal celled it was one of my favorites.

This is a great series and like Burn Notice should have gone on in a revised form as PI’s fighting the endless bad guys.

The CW F up bad this was the best show on Friday nights. Maggie Q was awesome in this roll. Going to miss her very much!!!!!

Really unfortunate that you are cancelling Nikita. This show is better than most of the garbage out there. Too bad that you decided to let go of the best bunch of actors/actresses and a great storyline. Totally sad. There are too many poor shows / series at hand.

Love the show they would be fools to cancel the show Nikita. Kicks. But very. Smart. And exciting. Show keeps. You on your. Feet. At all times.

I think best action series of recent times..just awesome and niki is fabulous.

I like the show Nikita. I think Maggie Q is fantastic. Some of the women that they say are the loveliest women in the world have nothing on Maggie. She is a very beautiful woman. She was made for the show Nikita.

[…] a ratings hit, Nikita has now been moved to Friday nights by The CW. Will Nikita prosper on that night (as Supernatural […]

you can watch it here

We had a storm during the season finale and we missed the last 7 minutes where can I go to see the series finale? Thank You Janis Cooper

Try cw.com or hulu.com to see the season finale.

Renew renew renew! This is is smart and exciting an Maggie Q is a goddess. Ratings need to be HIGHER, because people are missing out!

I absolute love Nikita! I really enjoy shows with powerful women on TV, like Nikita and Rizzoli & Isles. We need more of these kind of shows!