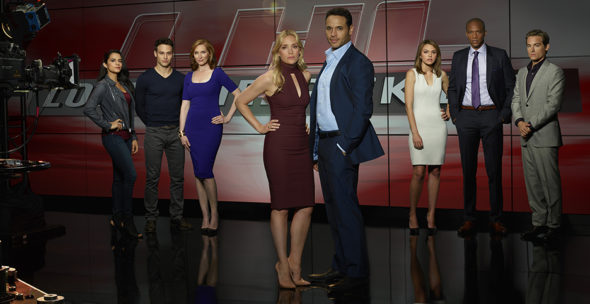 Will the Notorious TV series be cancelled soon? ABC has reduced the Notorious season one order to ten episodes. (photo: ABC/Bob D’Amico)

ABC has cut the Notorious TV show’s production order from 13 episodes to 10. Deadline reports this is not an “outright cancellation,” since the Alphabet Network plans to air all ten episodes. Maybe that seems like a good sign to hopeful fans, but it is not. Trimming the production order is the classic first step, in the peter-out approach to cancelling TV shows.

Will ABC Cancel Notorious? A Look at the Numbers

First of all, the freshman series has not been a ratings powerhouse. As of episode 1.05 on October 20th, Notorious was averaging a 0.96 in the 18-49 year old viewer demographic. In addition, it has only been drawing  an average total audience of 4.378 million viewers.

Secondly, in the 2016-17 television season, we have been tracking the ratings for 19 scripted ABC series. Sorting by its number in the demo, Notorious places 14th, among ABC shows. Notorious ranks 13th, when we sort by average total audience size.

Furthermore, as a show ages, it naturally falls some in the ratings. Because the season one numbers are so anemic, it is unlikely ABC will renew Notorious for season two.

What do you think? Are you a Notorious fan? Do you think ABC should cancel Notorious or renew it for a second season? Sound off in the comments.

Please bring the show back – we love it!! We record everything so time slots are not a problem for us.

I really enjoyed the show! It was a great escape from my reality each week! Also Piper’s character was kidnapped in the last episodes of season 1, I’m dying to see how it turns out!! Please bring back Notorious!! I looked forward to watching it each week as I’ve been incapacitated due to surgeries and bed ridden often!! The actors are GREAT and Very Good looking, and I loved the interaction between the characters! I’ve lost so much in my life, PLEASE do not take this series away from us!!! Thank you!!

Notorious is a good show, My wife and I love it!!! It was a great filler for Scandal but now it needs to be on a different day and time slot. Give the Show a Chance Bring IT BACK!!!!!

This should be a keeper!! Piper Person from Covert Affairs and Daniel S. from Graceland you couldn’t go wrong…You target 18-49 watching TV shows??? 18??? What about 50 +? I guess we’re just rocking our lives away. Listen to your fans, not a ratings box. Feedback from fans should count also. l still miss Rookie Blue & Mistresses. Please let us have more episodes.

I like this show. ABC should keep it as they don’t have very many good shows. This is one I look forward to watching.

This is a fantastic show I love all the actors on this show please keep it on my family love it.

I am a Notorious Fan because of Piper Perabo. I became a fan of her work in the series called Covert Affair. That show should have never been canceled. The cast on Notorious is great. The show is very suspenseful.
PLEASE let it continue!
My husband, son & his fiancé & I watch it. I would love to see it on a Monday night or Friday night.
It is a great show that can prove its worth.
Thank you.
PLEASE BRING IT BACK!!!!!!