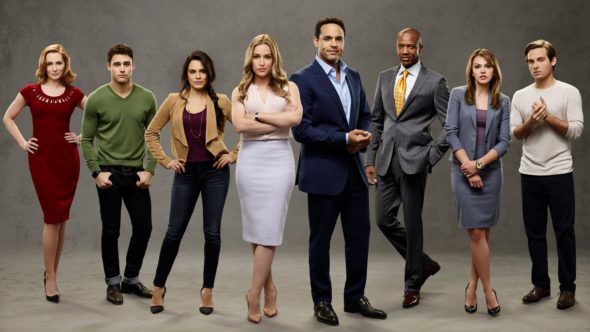 TV show description:
This dramatic television series revolves around the symbiotic relationship between a charismatic defense attorney and a powerhouse TV producer as they attempt to control the media, the justice system, and each other. Together, they make great TV and determine the nation’s headlines.

A driven professional, Julia George (Piper Perabo) is the producer of the number one cable TV news program in the country, Louise Herrick Live (LHL). She doesn’t just control the nation’s headlines, she owns them. She’s squeaky clean on paper, but fights in the mud when necessary.

A brilliant broadcaster, Louise Herrick (Kate Jennings Grant) hosts her own top-rated show but her behind-the-scenes antics cause trouble wherever she goes.

An eager-to-please production assistant, Ryan Mills (Ryan Guzman) is also the son of the network president. He’ll do whatever it takes to climb the ladder at LHL. Megan Byrd (Sepideh Moafi) is a street-smart journalism school grad who’s responsible for scheduling and managing LHL guests.

Charismatic and sexy, defense attorney Jake Gregorian (Daniel Sunjata) will manipulate the media and public opinion to win his cases at any cost. He might seem invulnerable, but he has a soft spot for Julia and he relies on her — both professionally and personally.

His brother is high-powered defense attorney Bradley Gregorian (J. August Richards). They inherited their father’s law firm. They represent the rich and powerful and are experts at using the media to exonerate their clients in the court of public opinion.

Also working at the firm is book-smart attorney Ella Benjamin (Aimeé Teegarden). Fresh out of law school, Ella is a straight shooter and zealous about getting ahead in her career.

Oscar Keaton (Kevin Zegers) is a billionaire playboy and a social media mogul.

Series Finale:
Episode #10 – Taken
When Julia is mistakenly taken hostage by Mexican cartel leader Carlos Mora (guest star Jose Zuniga), Jake and LHL take extreme measures to ensure her safe return. Mora says he will release her and a fellow journalist if she produces an interview that would advance his propaganda.
First aired: December 8, 2016.

What do you think? Do you like the Notorious TV show? Do you think it should have been cancelled or renewed for a second season?

Loved the show, it should be brought back.

Please please put this show back on I love the plot of Notorious. Please

It was one of the best on ABC. I guess ABC thought differently. I wish they would change their minds.

What is wrong with ABC? Do they cancellation on the brain? They have gone cancel crazy. They just cancelled one of the shows on that network. The way they are canceling shows, there won’t be anything left on ABC to watch.

I Love this show. One of the best and ABC needs a good show so don’t cancel it.

Bring back this show is is one of the Good ones

Love Notorious and long time fan of Piper’s! Please don’t cancel, it has been a favorite since its debut.

Love this show. Don’t cancel, but if you have to cancel a show can you at least have a proper ending?

PLEASE bring Notorious back to the air… this one is an absolute gem which can stand the test of time! Thank you ABC for bringing us this true gold and allow it to continue for many years to come

Please do not cancel another favorite of mine and my familys’. Don’t become another one of those networks “notoriously” known for dropping shows before they have had a chance to develop a big following, which given the chance, I believe this show could. Thank you for your time and consideration.

Please do not cancel Notorious, it’s a great show & I miss it. I loved it so much that my husband became a fan & was watching it with me.

RENEW!!!!! Finally a show that is true entertainment. The main characters are friends and enemies and family. It’s complicated and awesome!! Keep this show!

Love, love this show so awesome, one of my favorites please renew!!