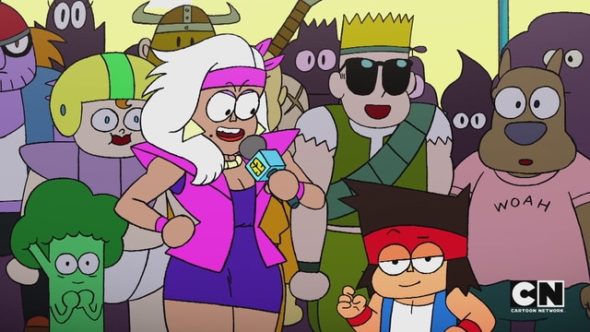 It seems everything is A-Okay. Cartoon Network has renewed its OK K.O.! Let’s Be Heroes TV show for a second season. In addition, they’re releasing a new console game, OK K.O.! Let’s Play Heroes, to tie into the animated superhero series.

Cartoon Network’s OK K.O.! Let’s Be Heroes is leveling up for a second season, set to premiere in 2018. Created by Ian Jones-Quartey OK K.O.! is a dynamic storytelling universe at the nexus of gaming and animation. Developed in tandem with the series, OK K.O.! Let’s Play Heroes is the upcoming console video game and the first official trailer is now available for fans here.

Season two will be even more heroic for K.O., Enid and Rad as they continue to level up with all new adventures. There are new threats and villains on the horizon as mysteries of Lakewood Plaza Turbo begin to reveal themselves. Surprise heroes will also make their debut alongside some familiar faces in special crossover episodes that will kick up the action, laughter and comedy into maximum drive.

OK K.O.! Let’s Play Heroes is published by Cartoon Network, developed by Capybara Games and written in collaboration with series creator Jones-Quartey. This latest video shows off the many familiar characters fans can expect to see, as well as the game’s colorful blend of side-scrolling action and RPG elements. When Lord Boxman resets the card levels of every hero in Lakewood Plaza, it’s up to K.O. to help his friends and secure his place as a true hero. Battle Lord Boxman’s evil robot army in fast-paced brawls, explore the mall to find quests to complete, and level up special POW cards for new abilities to put the pain on Lord Boxman’s most diabolical scheme yet.

OK K.O.! Let’s Play Heroes is expected to launch on the PlayStation(R)4 computer entertainment system, Xbox One and Windows PC via Steam in early 2018.

Fans can watch episodes of OK K.O! Let’s Be Heroes anytime on the CN app available on iPhone, iPad and Apple TV through the App Store, Android devices via Google Play, Amazon Fire TV, Roku, and Xbox One.

What do you think? Do you and/or yourfamily watch the OK K.O. Let’s Be Heroes TV show? Does the game seem like it will take off? Tell us.