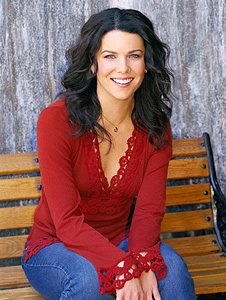 The show was supposed to debut in September but a couple months ago, it was reported that production on Parenthood was being delayed. Tierney was diagnosed with breast cancer and a decision was made to wait while she recuperated from surgery. A month ago, Tierney dropped out of the project completely because she needs ongoing treatments.

That news sent casting directors scrambling to find a suitable replacement for the pivotal role. Mad About You’s Helen Hunt was initially approached for the part but ultimately a deal couldn’t be made with Academy Award-winning actress.

Now, another TV show veteran has been tapped to join the cast — Lauren Graham. Of course, the actress has plenty of experience playing a single parent on the small screen. Graham spent seven years playing young mother Lorelai Gilmore on The WB and CW networks’ Gilmore Girls.

Production on the new Parenthood series is expected to begin next month. Episodes are expected to debut in 2010, following NBC’s coverage of the Winter Olympics.

What do you think? Does Lauren Graham sound like a good choice for this drama?

when does Parenthood beegin this Fall? has it been cancelled

Perfect choice – I love her – – Loved her on Bad Santa and The Pacifier as well. She and Dax were actually the reason I chose to check it out in the first place – – – oh a Craig T. Nelson as well!

I LOVE this show! Lauren Graham is good, but she is definitely not the only talent in the room. This show is chock full of talented actors. It is one of only two scripted television shows we watch at my house. It is full of warmth and subtle humor, and every episode comes together in the end in such a sweet way… not sappy, it just reminds us of how beautiful and rewarding these family ties can be.

Lauren Graham is a great talent that deserves better than this boring, confused mixed up confused cast of characters. Ron Howard can surely do better than this. Probably one of the worse TV shows I’ve seen in recent years. Poor writing. Poor casting. Why would anyone want to see this every week ? The Gilmore Girls was a gen. Parenthood is a dog. And not a dog I want to visit me every week. The whole concept doesn’t work. Drop it and start over again. Almost anything would be better. Face reality or just wait until the figures come in… Read more »

Get a grip – – seriously – – this show is great and so is the entire cast. You wish it would be cancelled – but I don’t see that happening. Choose not to watch if you wish (although it sounds like you do – perhaps a closet watcher – – ), but nevertheless, simply do not watch – – no need to be so rude about it.

Delighted to hear about Lauren Graham… Will watch SPECIFICALLY DUE TO HER BEING IN IT. Would not even remotely consider if it had been Helen Hunt… what I’ve seen of her, she is entirely too saaaaapy and not the actress she’s cracked up to be… Lauren Graham is a gem. GG is THE show that brought me to TV land and away from my distaste for the passive act of watching television.. she’s unbelievably talented… as is the writer of the lines for the first number of seasons! Can’t wait to see this newest work of Graham’s!