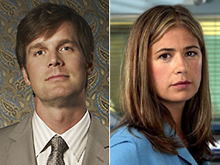 Based on the success of the film, NBC decided to try making a Parenthood TV show. The plot was very similar and three actors reprised their suppting roles; Ivyann Schwan, Zachary La Voy, and Max Elliott Slade. The series stars Ed Begley, Jr., Maryedith Burrell, Ken Ober, William Windom, and Jayne Atkinson. Curiously, many of the young and virtually unknown castmembers have gone on to a great amount of success over the years — David Arquette, Thora Birch, and some guy named Leonardo DiCaprio. Other castmembers include Mary Jackson, Sheila MacRae, Bess Meyer, Susan Norman.

Though the half-hour sitcom was co-written by a pre-Buffy the Vampire Slayer Joss Whedon, it wasn’t a favorite with viewers or critics. Only 12 episodes were made before Parenthood was cancelled. The last episode aired on August 11, 1991.

Now, 20 years after the theatrical release of the movie, NBC is developing a new Parenthood TV show. It’s being adapted by Jason Katims (Friday Night Lights) who will executive produce, along with Imagine TV’s Howard and Brian Grazier. The project supposedly will not interfere with Katim’s commitment to Lights, should it be renewed for another season.

Peter Krause (Dirty Sexy Money) and Maura Tierney (ER) have just been cast in the project and will play the roles originated by Martin and Weist in the film version. They join several other cancelled TV show veterans. Erika Christensen (Six Degrees), Mae Whitman (Arrested Development), Sarah Ramos (Runaway), are all set to co-star and Craig T. Nelson (Coach) and Dax Shepard (Punk’d) are currently in negotiations to join them.

This new version of Parenthood will be an hour-long update of the original and take into account the modern challenges of parenting in today’s fast-paced world. The network has committed to shooting a pilot but hasn’t given the series a full greenlight yet.

Please don’t cancel Parenthood. It is one of our favorite shows. We love the characters and the true to life problems they have and the closeness of family. They show how a family cares for each other, and the love that they have for each other.

Are you interested in producing a Painting with Harold show ??

I have some video tapes of me finishing a painting in 30 minutes, with commentary on what and why. Search the web for Harold Lyon Artist to see the quality of my paintings.
There is no Television Show like this one anywhere.

Please send me a email if you are interested
Attention ……….. Executive Producer David Madden

Lets not cancel this show.It relates to most normal ameican families,and what they have to cotend with in life.Keep it for another season for sure.to many cliff hangers,to cancel it this year.

Parenthood is one of the best shows on TV.Down to earth people that anyone can relate to.Please don’t remove it,it can make it another season,the way you left ,with lots of cliff hangers. keep it going !!!!!!

This show is great. I record it so I don’t dare miss it. If you let this one go
you are crazy. It’s the best.

I just started watching Parenthood this season and got hooked. I LOVE IT. Now when I tune in on Tuesday night it is not on. DO NOT CANCEL IT.

This is the only show that I have ever inquired about. I just LOVE it and all of the cast members are great in the part that they play. I couldn’t believe it when I tuned in on Tuesday night and it wasn’t there….Bummer. It is my favorite show on television including HBO and Showtime.
I will wait until January, 2011. Thanks for bringing it back.
Sandy P.

pLEASE, PLEASE DON’T CANCEL THIS SHOW!!!!!!! iT’S WONDERFUL , DIFFERENT
CLEAN FAMILY STUFF. WHERE DO I GO SO THIS CAN BE HEARD AND ACKNOWEDGED?