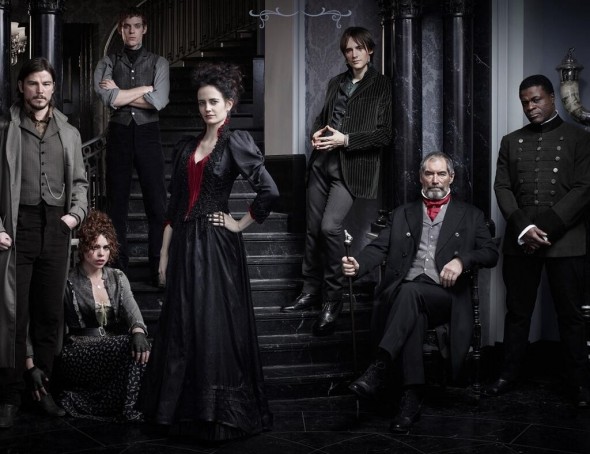 TV show description:
This horror series is a psychological thriller that weaves together horror origin stories from classic literature into an adult drama. The title of the show refers to the penny dreadfuls, a type of cheap 19th century British fiction publication which featured lurid and often sensational material.

Ethan Chandler (Josh Hartnett) is a charming American who’s very popular with the ladies and who finds himself trapped in the dark corners of Victorian London. Behind Ethan’s bright eyes lurk dark secrets. He is running from something and his troubling past threatens to overtake him at every turn.

A hardened African explorer on a deeply personal quest, Sir Malcolm Murray (Timothy Dalton) has nonetheless paid a heavy price for his exciting career. Although his stately home is filled with marvelous souvenirs of his travels, it is devoid of family and loved ones. With the help of Vanessa Ives, he is determined to right the wrongs of his past.

Poised, mysterious and utterly composed, Vanessa Ives (Eva Green) is a seductive and formidable beauty who’s full of secrets and danger. She is keenly observant (perhaps even clairvoyant) as well as an expert medium. Her supernatural gifts are powerful and useful to those around her but they are also a heavy burden. Her inner demons are very real to her and threaten to destroy her relationships, her sanity, and her life.

Sembene (Danny Sapani) is an African man with ritual face scarring. He serves as Sir Malcolm’s sentry and confidant. Sembene has an air of mystery about him and his heroic efforts prove invaluable to Sir Malcolm in his personal quest.

Dorian Gray (Reeve Carney) is a fabulously wealthy young gentleman who is almost unnerving in his beauty. His skin seems to radiate a golden glow of intoxicating youth and promise. A recklessly abandoned sensualist, he has a devil-may-care attitude that borders on dangerous. Nothing seems to faze him, nor are any risks too great. He is, in fact, unnaturally drawn to them.

Brona Croft (Billie Piper) is a poor Irish immigrant who is trying to escape a dark and sordid past. The Gaelic meaning of her name is “sadness,” yet she remains lovely, spirited, and erotically alive. She forms a bond with Ethan and he will do anything for her.

More a Romantic poet than a surgeon, Doctor Victor Frankenstein (Harry Treadaway) is a tender, gentle soul who is fascinated by the mysteries of life — and death. He has dedicated himself to researching what makes something live, and has sacrificed everything for his scientific pursuit. However, he is playing with fire. His research pays off in shocking ways — with devastating consequences.

What do you think? Do you like the Penny Dreadful TV series? Do you think it should have ended or been renewed for a fourth season?

penny dreadful was one of the classiest horror series on tv. it was one of the few shows i actually watched and was just riveted to my chair every sunday at 10pm when it was showing. the end was touching i actually cried because i felt so sad that ethan and vanessa would end up apart.but you could actually see and feel how much they loved each other. the acting was always impecable the writers incredible, director, producers people behind the scences i don’t know what else to say. i will miss this show very much. bravo and a standing… Read more »

So disappointed that PD has been cancelled. I found every episode gripping, but especially A Blade of Grass. The series was just getting into its stride and at least 2 more good seasons could have been forthcoming. I hope we see some new work soon from the writers and team.

Very disappointed to find out pd was canceled. I really enjoyed the show, characters, and gripping story lines. Please bring it back!

I’m absolutely devastated to find out that PD will not be returning for a fourth season? The story lines were stupendous, a well chosen cast and not to mention, every episode had me sitting on the edge of my seat! There are plenty more stories and characters that could come to life on this show! I applaud the producers; writers; directors; the entire cast….BRAVO, WELL DONE! I’m begging for more!

I rarely get so upset over a series cancelled, yet Penny Dreadful ending has me depressed. I know crazy huh, but the series had so much depth to it and with literature favorites. I do hope there are more stories left to be told and these quality actors will be there to live them out for devoted dreadfuls. I see the ratings were up and down, so curious if this had anything to do with the ending???

All the great, creative shows never seem to stay on long. How disappointing…

My heart dropped when I watched the last episode and realized it was over. I hope it is picked up again. One of the best shows on TV. PLEASE, PLEASE, PURTY PLEASE BRING IT BACK!!!!!!!

This is a direct message and plea to the directors and producers of Penny Dreadful. I cannot tell you of my disappointment of the ending of the finale. Please, please, please tell me this is not the real ending! There are so many more stories that could be told with this series still. If you cannot not come up with some really good stories, I have plenty of ideas . I am so sad that this has happened in this way!

Tonight when the season finale ended it seemed like it was the end of the show. Please have it return next season. It is one of the best series on television.

Please keep Penny Dreadful, its one of the best shows on TV

I hope Showtime is smart enough to renew Penny Dreadful. Love it, so well written, directed and acting is to the max. Don’t be stupid. Keep PD. I’ve turned my friends from Outlander disappointment and they’re very happy.

Hopefully it is renewed. I love this show.