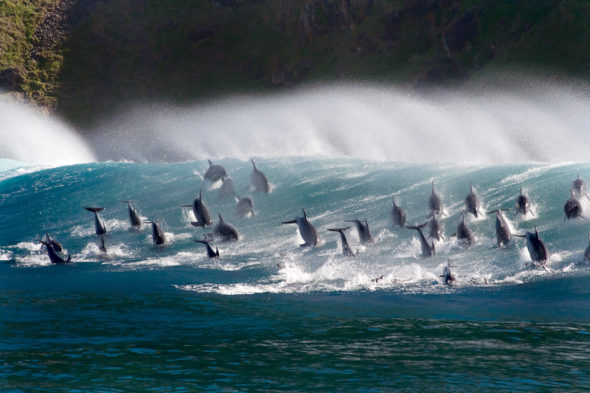 Get ready for the return of Planet Earth! Planet Earth: Blue Planet II will premiere in January. It will air on BBC America and other networks.

AMC revealed more about the BBC America premiere in a press release. Check that out below.

“Planet Earth: Blue Planet II, the next installment of BBCA’s Emmy Award-winning Planet Earth, will premiere on Saturday, January 20, 9/8c, as an AMC Networks simulcast event across BBC AMERICA, AMC, IFC, WE tv and SundanceTV. Subsequent episodes will appear Saturday nights on BBC AMERICA. The new series*, presented by Sir David Attenborough, scored by Academy Award-winner Hans Zimmer and produced by James Honeyborne has already become a major television event around the world.  The series will premiere day-and-date in Canada on the BBC Earth Channel.

Planet Earth: Blue Planet II takes viewers on a revelatory and magical journey into the mesmerizing world of our oceans – the most undiscovered place on our planet. Our oceans are by turn tempestuous and serene, exquisitely beautiful and bleakly forbidding. They cover 70% of the Earth’s surface and hold 97% of all the water in the world. There is more life in the deep sea than anywhere else on Earth. It is said we know more about the surface of Mars than the depths of our own planet. Our final frontier is the deep ocean – Earth’s ‘inner space’.

Ed Carroll, Chief Operating Officer of AMC Networks, said: “Planet Earth: Blue Planet II is rare, event television, an extraordinary series we are so proud to launch as a premiere simulcast across all five of our national networks. AMC Networks prides itself on being a premiere destination for extraordinary storytelling in all of its forms, and this remarkable exploration of our natural world from the BBC is storytelling at its finest.”

Sarah Barnett, President of BBC AMERICA, said: “This next chapter in BBC AMERICA’s nature programming franchise is more incredible than anything yet seen, complete with heart-pounding exploration and incredible cinematography. The experience is a magical and transcendent trip into unexplored worlds.”

In the UK, the series is the highest rated show of the year and the most watched natural history title in more than 15 years with in excess of 14 million people tuning in for the premiere episode. Already a staggering hit in China, all Planet Earth: Blue Planet II content, including short form, trailers and the first two episodes, was watched over 100 million times in its first 13 days. The series premiere also trended globally on Twitter.

By using breakthroughs in science and cutting-edge technology to explore this final frontier, the series reveals the astonishing characters, otherworldly places and extraordinary new animal behaviors. Warm and compelling stories about marine habitats and their characterful inhabitants will build people’s emotional relationship with our oceans and bring a new perspective to this little-known world.

Over four years in production, the Planet Earth: Blue Planet II teams mounted 125 expeditions, visited 39 countries, and filmed on every continent and across every ocean. They spent over 6,000 hours diving underwater, filming everywhere from familiar shores to the deepest seas. From the Gulf of Mexico to the Seychelles and from South Africa to Norway the team filmed several ‘firsts’ including:

Planet Earth: Blue Planet II will be presented by Sir David Attenborough and is made by BBC Studios’ Natural History Unit, co-produced with BBC AMERICA, Tencent, WDR, France Télévisions and CCTV9 in partnership with The Open University. It is Executive Produced by James Honeyborne and Series Produced by Mark Brownlow, and was commissioned by Charlotte Moore, Director of BBC Content and Tom McDonald, Head of Commissioning, Natural History and Specialist Factual. The score was composed by Hans Zimmer, Jacob Shea and David Fleming for Bleeding Fingers Music.”

Are you excited to see more Planet Earth? Tell us what you think.