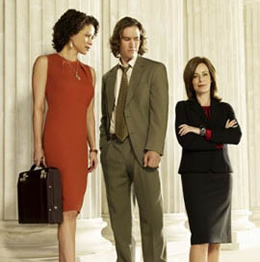 TNT’s cancelled legal drama, Raising the Bar, is returning to the cable channel, albeit for one night.

The final three episodes of the drama, featuring Mark-Paul Gosselaar, Gloria Reuben, Currie Graham, Melissa Sagemiller, J. August Richards and the rest of the cast, will be shown in a mini-marathon on Christmas eve.

The installments begin at 8pm and continue until 11pm. The titles are “Maybe, Baby,” “O! Say Can You Pee,” and “Happy Ending.”

What do you think? Will you be tuning in to watch the Raising the Bar characters have their final day in court and say goodbye? Anything you hope to see happen in the final episodes?

It is unbelievable that The Closer is going to continue, but Raising the Bar isn’t. What a crock of crap! I will definitely watch the final episodes, but may never watch TNT again. As it is, that is the only show I was watching on that station anyway. Goodbye TNT!

OMG!!! How can this be?! I’m in complete shock… I loved this show and I never missed a single episode. It’s such a great show. I’m so disappointed with TNT for canceling the show. I’m definitely not gonna miss their last few episodes. I hope they have a change of heart and keep the show.

Yes I will watch it and hope they change their mind and bring it back.

one of the realistic shows – very sad to see it leave, watching reruns is better that lots of other shows on tv.

I can not believe they are canceling such a great show. Why oh why do they cancel all the good shows and leave the worst ones. Good tv shows are getting fewer and fewer. If the other channels were smart they would pick up this fine show. I will miss this show alot.

I stopped hoping for more seasons of shows on TNT after they canceled Trust Me.

I’m surprised they are even airing the last 3 episodes at all.

I really liked this show I can not believe some of the shows they are canceling. It seems to me that all of the good ones are getting dropped this year. Of course I will watch the last three episodes after all it is my last chance to see the show

Every season I get upset at which shows go and which shows stay. I am so sad this one isn’t staying. Like the person stated above, it was well written, well acted so of course it goes. Shame shame shame….. I will miss it greatly!

of course its canceled…its intelligent, well written, well acted…and the kiss of death…I liked it.
just as long as Son of Anarchy stays put ill be ok i guess…

That’s a shame. What a great show. I’ll definetly be returning to watch it.

We only watch about six shows on TV and this was one. I tune out all that reality stuff. Too bad, TV just gets worse and worse.

I would love to know who decides what stays and what goes. That was a really good show and, of course, I will watch the 3 final episodes. I cannot believe Psych stays and Raising the Bar goes. I know they are different channels, just saying.

@Roberta Sherman: Essentially the viewers decide what stays and what goes. If not enough people watch, the networks don’t make enough money to justify making more episodes of that show.

The 1 thing that burns me is that the suits cry about lousy ratings, but they need to re-invent the way the ratings are collected. They need to factor in those people that don’t watch live, but dvr the show. Sure, some may say that takes away from the advertiser money, what with fast forwarding through commercials. But, the airwaves are so saturated with commercials that they would get viewed.

I wish that TNT had not cancelled this show. I will watch the last three episodes and hope that if they get enough viewers, they will change their mind about canceling.

That’s a shame. I really enjoyed the show.