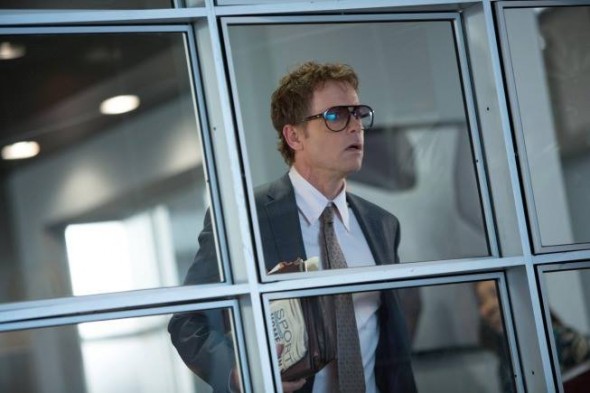 FOX has officially cancelled the Rake TV series. The news comes as no surprise and leaves the dark comedy with one episode unaired.

The show got off to a poor start on Thursday, January 23rd, and the ratings dropped lower in subsequent weeks. After seven episodes, the network sent the series to Friday night where the ratings got much worse — even by Friday night standards. FOX aired two more installments on a Saturday night and has yet to release the final episode.

What do you think? Do you think this show sould have been cancelled? Are you sorry that there won’t be a second season of Rake?

I liked the show a lot. Sad to see it go. So bummed.

I really enjoyed the show and am disappointed it was canceled. I thought Greg Kinnear was great and it was so unique.

Why do they continue to cancel smart and creatively funny shows???? Let’s do some more assinine , screaming, obnoxious garbage.

Maybe if it wan on another network it was gonna be great maybe people just hate fox. I loved RAKE

I liked the show, I thought it was pretty good

We loved this show. We were really disappointed when it was cancelled. Could it have been something to do with the rottwieler?

Considering that AMC has almost the same exact show on the air with good ratings called, ‘Better call Saul’. It wasn’t a bad concept. Too bad they canceled it, but it wasn’t the show’s fault.

I kept waiting for Rake to reappear this year. It was real, original, funny, and very sexy and believable all at the same time it was lowing ground reaped and tilled to death by scores of other shows. And it was on free tv. As Betty writes above, one of the best shows I saw. Sorry…. we need another confrontational reality show to entertain the brain dead masses.

I was waiting also for rakes return. This really blows

Too bad ‘Rake’ got cancelled. Kinnear played a funny & believable character. The actors were in sync and the show was entertaining. If Friday night didn’t attract an audience then at least another night should’ve been considered before canceling ‘Rake’.

I’m very Sad the Rake TV s on FOX will not return. That was a strong Funny show! It just too Bad

I loved the show. Something original. Why not cancel some of the lame shows they still air — Last Man Standing for one. None of the story lines are original on that show. Rake should be on a different night–not Friday.

We thought the programme was one of the most humorous and entertaining Australian shows we have ever seen. are very disappointed that there will not be a second season.
Why doesn’t the Australian audience support their own industry? By the way we are kiwis. bring back Cleaver Green

It’s the American copy, a pale shadow of the Australian version, that has been cancelled. I agree with you about the Australian show, which ran for 3 seasons and was very entertaining. The Cleaver Green character is based on a real person, and some of the plot lines happened in real life.

I LOVED the series Rake. Can’t believe it’s cancelled!! One of the very best shows I ever saw.