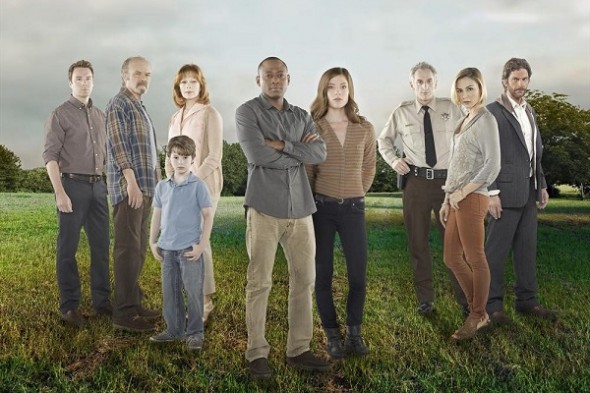 The show about people returning from the dead — is now dead itself. ABC has cancelled their Resurrection TV series after two seasons on the air.

The series debuted well but the ratings declined over the course of its first season — averaging a 2.52 rating in the 18-49 demographic with 9.32 million viewers. The network brought it back anyway and the second season debut was down by more than 40% when compared to the series debut.

By the end of the second season, Resurrection’s second year ratings average was at a 1.26 rating in the demo with 4.67 million — a season-to-season decline of 50%.

The last episode aired on January 25th and sadly didn’t offer viewers a resolution to the story.

What do you think? Did you like this series? Are you sorry that Resurrection won’t be returning for a third season?

Maybe bring the show back for a few episodes so at least we can have some kind of ending. It was such a great show!

Too bad it was cancelled. Again I am left with a series with no real ending.

Please keep this show…really missing it since the season finale

Can’t believe ABC cancelled this show. Would have been nice if they could have had an ending before cancelling. I enjoyed the show very much & I know of many other people who were looking forward to the new season. Wish they would reconsider before all the actors find new jobs.

Can’t believe the show is cancelled. Enjoyed it very much. I think ABC could have at least come up with an ending for it’s fans before taking it off the air. Hope they will change their mind & bring it back. Many people were looking forward to the new season.

Can’t believe ABC cancelled this show. Would have been nice if they could have had an ending before cancelling. I enjoyed the show very much & I know of many other people who were looking forward to the new season. Wish they would reconsider before all the actors find new jobs.

I feel there was so many viewers looking for this coming back on the air. I think if you take a pole that really loved this show. All the first and second season were the best we have ever seen on t.v. So please take a second look at this show.

I liked that show a lot.Please bring it back.Want to know how it ends.

Resurrection was ABC’s best Sunday night series. Period. I have no need to watch ABC after 7pm CT.

It was a weird show. But my twins played Rachel’s newborn baby!!

Sorry to see it end. Need to at least have an end to the story line. Looked forward to seeing it each week.

Ugh I’m really mad about them cancelling resurrection I really got into it in the second season. Now I’ll never know what happened to everyone in the town. I thought is was a very good show… And I don’t watch very much TV we’ll at lest Once upon a time is coming back!!! I can’t wait for season finale.

I am tired of the lame TV executives who sit down at their cushy jobs who decide to cancel great programs such as resurrection and forever. Please wake up and put them back on. Some of us enjoy quality shows ,not mindless realty or stupid comedies that should not see the light of day.

It never fails, every time I find a show that I love to watch it gets cancelled and is usually replaced by something stupid. They could have at least done one more season so we knew what happened to everyone!!!! I guess they think we need another reality show. 🙁

I am as angry as all of you about the cancellation of Resurrection, my Wife and I can count on one hand TV programs we enjoy watching together, and still have fingers left over. Having worked (in the 80’s) in the film industry, I can tell you a couple things about why shows get canceled, lets use resurrection as an example. When the show premiered it had roughly 10 million viewers, episode to episode, that number dwindled to about 4 million (roughly, the population of Oregon, ONE STATE!).. Networks make $$ on advertising and companies want the biggest bang for… Read more »

sorry what ABC did was wrong in my book! they put people out of work,we weren,t allowed to know what happened.we were left in the lurch! i will be boycotting ABC! they,ve lost me as a viewer.i,ve asked mediacom to drop ABC.