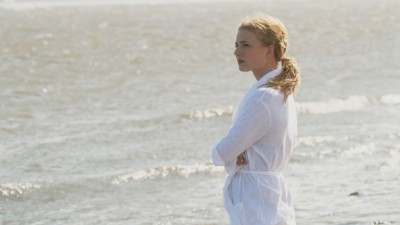 Last night ABC unveiled their first new TV show of the fall season, Revenge. The network isn’t in bad shape overall but is certainly in need of some new hit shows. So far, it looks like Revenge might be able to help.

In its 10pm timeslot, the new TV series attracted a 3.4 rating in the 18-49 demographic and 10.15 million viewers (per the fast affiliate numbers). That was enough for Revenge to win its slot in the all-important demographic. The season premiere of CSI (now starring Ted Danson) was the the winner when it came to total viewership.

This was a positive beginning for Revenge but we’ll have to wait until we see the final national numbers, the 15-minute breakdowns, and to see how well it performs next week. Last night’s premiere had a huge lead-in from Modern Family (a 6.0 in the demo and 14.29 million) and next week’s episode won’t have that benefit.

What do you think? Did you watch Revenge last night? What did you think? What’s your gut instinct? Should the new series continue or do you think it’ll be cancelled after one season?

I LOVED Revenge! The best show to be on TV in a very long time. Intriguing, mysterious, edge of the seat anticipation, juicy subplots–Revenge has it all! Can’t wait to watch again. Hope I don’t miss a single episode.

Love it! I’m hooked! Now ABC don’t be stupid and cancel it before it gets a following!

I can’t believe these quotes…”better than Modern Family” ? Really? If you feel that way you should skip Modern, seriously. I am inclined to believe the ‘loved it’s are coming from ABC employees……not a first….’watched it 15 times’? You need to get cable. I loved Stowe….15 years ago…now she looks like a surgery nightmare…the lead is one of the weakest actresses I’ve seen and the supporting women are awful. Only good one seemed to be tossed from the show..at least she could act. The billionaire kid is the worst & I think it’s the script, not the actor. I had… Read more »

Absolutely Loved It!!!! Is my favorite show this year, liked it better than even Modern Family. Hope the ratings are good cuz I want this show to last.

Wait a second, don’t get ahead of yourself. It does not beat modern family but I do think it is a good show. Just saying.

Loved the show!! I’ve watched it about 15 times since!!

Absolutely loved it! Lots of great drama. Keep it on!

Only watched part of it because I was too lazy to change the channel after Modern Family.. Probably won’t watch it again.

My wife and I both LOVED revenge. Best new show of the Fall TV season. Great cast.

Pilot was GREAT! keep it on please!! Love it.

loved the show. will continue to watch.

LOVE, LOVE, LOVE IT! Will not miss an episode!