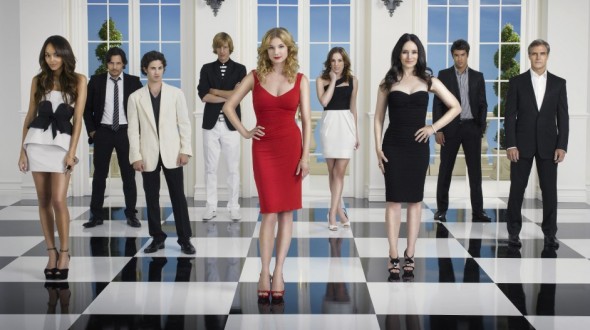 Last year, the ratings for Revenge hit new lows but ABC renewed it anyway — likely so that there would be enough episodes for a syndication package. How are things going this season? Have the ratings improved or is it time for the series to end?

Things have changed on this season of Revenge but Emily Thorne (Emily VanCamp) and Victoria Grayson (Madeleine Stowe) still have plenty of reasons to hate each other. The rest of the show’s cast includes Gabriel Mann, Nick Wechsler, Josh Bowman, Christa B. Allen, James Tupper, and Karine Vanasse.

The first season of Revenge averaged a 2.5 rating in the 18-49 demographic with 7.8 million viewers. The second season dropped to a 2.2 rating and 7.0 million. Last season took an even bigger tumble and the ratings averaged a 1.6 in the demo with 5.9 million viewers.

Unfortunately, this season is performing even worse. The episodes that have aired thus far have averaged a 1.2 rating with 4.9 million. It’s the network’s lowest-rated drama and second-lowest rated scripted series (below Friday’s Cristela sitcom).

Based on the ratings, there seems to be little reason for ABC to continue renewing Revenge. If this is indeed the final season (as it’s rumored to be), hopefully the cast and crew will wrap up the series in a satisfying way.

What do you think? Do you think it’s time for Revenge to end? If you ran the network, would you cancel it or keep it going for a fifth season?

yes it got a bit silly, I think they wrapped it up pretty well. I thought these actors were very weak: declan, charlotte, david clark. The redhead was so-so (more palatable when she lost her phony Savannah accent).

I thought these actors were great: vancamp, stowe, czerny (he was probably my favorite, with his snarky sort of anger), jack porter, nolan, roger bart, Margeaux.

Maybe it just had too many characters coming and going, or not enough star power.

Who are the “numbers ” the networks keep talking about? Everyone I know loves this show first they cancel Touch, then Revolution, and now Revenge. This is why I have cable. I can’t invest in network shows. All reality and dumb down shows. Two broke girls, really?

Your all crazy it’s a great show

No don’t cancel it I love it ! You always do that like betrayal was really good too ! I look forward to revenge every Sunday it’s great why do u have to take it off !! I hate you

The actor who plays David Clark is an awful actor. More importantly, why and how does Emily have all of these males who adore her, put up with her and risk their own lives/ careers for her? You’re dad is back–get over it. Where was he anyhow? Emily is a psycho killer who has ruined numerous lives. I loved Victoria–she was always a class act. I hope Emily/ Amanda dies off.

It’s time to end “Revenge.” The writing has gotten worse every season. The story lines have gotten so stupid, all I can do is shake my head and laugh. What people want are shows with story lines that are believable. Why do you think the original “NCIS” is so successful? I’ll tell you why…it’ great writing. Too bad, because in the beginning, “Revenge” was a very good show. Now I hope it ends and ABC has learned a lesson.

People, it’s the last season, there are only two or three episodes left, it’s done so just make your peace with it and move one. It’s even surprising that it lasted that long, this series has been crap since series 2 (included). Sometimes producers and writers are just idiots, they tried to milk the cow by keeping Emily’s true identity secret for way too long and by dragging the story for way too long, it never evolved past the fact that Emily was really Amanda and all these other characters who had nothing to do with the main arc were… Read more »

I have watched Revenge since it’s debut, and I hope there are people out there like me who would love to see it continue. They advertised it plenty before the series started, and I think it would help if they advertised it more so people would get excited about it again and look forward to it coming on. There are plenty more story lines they could explore.
PLEASE, if there are more of you out there who would have the time and energy to help see this program continue let’s do what we can to make it happen.
Thank you