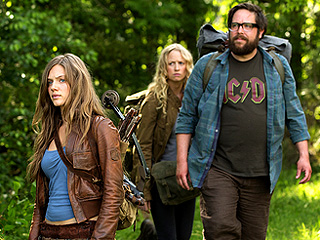 Earlier this month, NBC released the first episode of Revolution online. They were likely hoping to give viewers a chance to sample the TV series early and get some positive “word of mouth” advertising going. Tonight, the peacock network is airing the pilot on regular television. Will the show be quickly cancelled, a moderate success, or a big hit in the ratings?

Revolution takes place 15 years after an unknown phenomenon disabled all advanced technology and powered devices on the planet. People are forced to adapt and rebuild and, not surprisingly, the world becomes a very different place. Members of the Matheson family seem to have some answers as to what happened and how power might be returned.

Once the other networks have their shows in place, Revolution will be airing opposite ABC’s Castle and Hawaii Five-0 on CBS. NBC has ordered 13 episodes of Revolution to start.

Before you share your opinion below, here are some previews and the full pilot:

So, what do you think? Does Revolution look like a hit or a candidate for quick cancellation? Will you tune in, DVR the show, or skip it altogether? Do you think previewing and releasing the first episode online will help or hurt the show’s ratings?

This show is sooooo bad. I had a big LOL at the train episode. What the? In fact I had to fast forward through most of the episodes so far – there all the same!!!!. Search, get captured, escape after killing militia. Come on put some decent stuff on. Who writes for these shows should be sent back to writing school. Anyway the show good for a laugh.

Love it! I think the how does a Bret job creating what it might be like 15 years “after”. Yes, people are clean, have cloths, food, medicine….let’s not underestimate how much surplus “stuff” there is in the world and people are very smart and adaptable. They would have the knowledge but not the power…necessity is the mother of invention. Love the show!

The most EXCELLENT show!!! I am hooked. There are only three tv shows that I watch, and this is number ONE!

I just watched all 5 episodes in a row. I absolutely love it. It has me wanting more! I hope they don’t cancel it.

The first show was ok. But the second one , acting was hokey, stupid predictable things. Wish it would be better. No one would look at actors without teeth, and combed hair.

I like this show a lot, give it time to really get rolling. A lot of the first season of the walking dead was a snorefest, but it got better, so will revolution.

I think this is a great show and would love to see more of it..I think its a great plot and it had potential to get better.Do NOT CANCEL.Dont give up so easy if ppl want more action then give it to them.

I agree that it’s not gritty enough. And they eat 15 year old canned goods?! It’s hard to imagine any canned goods would even be left after that long. I don’t see anybody rubbing sticks together either.

These post-apocolyptic shows are TOO CLEAN. People would be grimier and dirtier, their teeth would be missing and they would be thin-food would be very, very scarce. To just survive on a daily basis would be a struggle. Test yourself, buy some canned goods, beef jerky and live on water as your only beverage. See how long you would last. Don’t take a bath or brush with aworn out toothbrush.

This show jumps on board with a genre that is becoming more and more popular, post apocalyptic survival. It jumps on board with the walking dead and movies like the hunger games. I think that it’s a very grow up show which may account for what some consider boring. If you haven’t been there since episode one, you’re not going to be a viewer or understand where the story is going. The main characters however are lacking, especially Tracy spiridakos. Her character is in my opinion too kind and weak to survive and this is not appealing to people who… Read more »

this show looks so bad that it makes tera nova and falling skies look like a good shows, and its hard cause they are the worst shows even created (well them and whitney). the worst of all is the horrible casting. the acting is elemetary school level. stand above them all is Anna Lise Phillips which makes bad actresses looks bad. avoid at all cost

i am trying to give it a chance… but so far… its borrrrring.