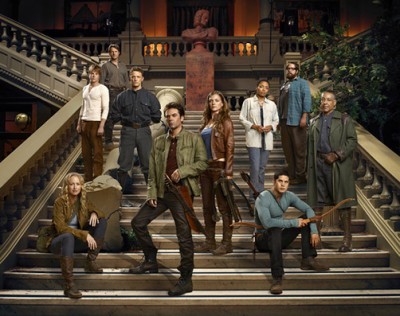 I just watched all of season 1 and 2 on 7 catchup and was so disappointed that there was no season 3! I’m left hanging and want to know what’s going to happen… so disappointed was a great show

They did do an on line comic to sum it up. Was not what they played to have happened. Best show ever and the f**kers canceled it. Hate NBC. They have done that before.

You should have never cancelled this show but leave it to the bigwigs that don’t have a clue.
You see money or scripted “Reality” instead of entertainment.
Dreamers and I don’t mean the illegal ones love stuff like this, this is what builds imagination,Strength of Character and Loyalty / Friendships and even nurtured Compassion.
If anything it should have been sold off / transferred to SciFi (SYFY) and let them run with it, Look what happened to Stargate SG-1 when Sold off to SciFi It Grew and Grew Became 3 Separate Series and Still draws a crowd today!

Bring back our revolution movie. That show is awesome. Why cancel such big shoe. Don’t make me hate you NBC

Awful serie, characters are so annoying and stupid, especially Charlie. I couldnt keep watching it past the third episode

I love that show. I don’t think they advertised it well. But I wish they would bring it back!!!!