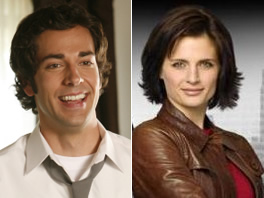 Well, after more than 4,600 votes in our game, it all comes down to two TV shows — the pair that the most people think should be saved. Is your favorite one of them? Can you choose between the two?

In round one of the game, we asked you to select from a list of 30+ shows that were of danger of being cancelled. Tough as it was to decide, more than 1,600 people made a choice and we came up with six clear favorites: Better Off Ted, Castle, Chuck, Fringe, Medium, and Trauma.

We’ve now closed round two and found some interesting surprises. Though shows like Better Off Ted, Medium and Trauma have very passionate fans, their tallies were far lower than the other three.

Chuck and Fringe — who both have lots of sci-fi fans — were nearly tied for second place but Chuck ended up the winner by about 30 votes. Did the shows split the sci-fi fan vote?

Castle was the clear winner of round two but, will the ABC show be victorious in round three? Now that Fringe is out of the running (and has actually been renewed), will the Fringe voters switch to Chuck? We’ve had upsets before so it’ll be interesting to see how you vote. It’s Chuck vs. Castle!

Don’t delay, this round closes on Monday, March 15th. Come on, tell us which bubble show would you save if you had the power to do so?

They’re both unqiue shows but since I watch Castle, CASTLE.

I love Chuck. Love the nerd turned hero. As for the Superman guy.. he is so hot. So oh yes adding him was a definite plus. I love this show it makes me laugh at every turn, be intrigued as to what happens next, and see the good guys fight the bad guys.
CHUCK! CHUCK!

I CAN’T BELIEVE IT IS DOWN TO THIS AGAIN. THAT IS WHY I DON’T LIKE TO GET HOOKED ON SHOWS ANYMORE IT ALWAYS COMES DOWN TO THIS….WHY YOU CAN’T KEEP PROGRAMS ON THAT WORK.. I LOVE CASTLE AND CAN’T WAIT FROM ONE WEEK TO THE NEXT..PLEASE DON’T TAKE CASTLE AWAY FROM US!!!! I EVEN WENT OUT AND BOUGHT THE BOOK…. I LOVE RICHARD CASTLE BACK WHEN HE PLAYED JOHNNY IN TWO GUYS A GIRL AND A PIZZA PLACE. I LIKED HIM THEN AND THINK THIS NEW ROLE IS JUST AS GREAT FOR HIM…

Man, what a tough decision. These are arguably my two favorite shows. I’ve loved Chuck since the beginning and actually took part in some of the campaigns to help save the show, something I’ve not done for a show before. Castle I only discovered at the beginning of this season, after finally watching Firefly for the first time over the summer. Chuck got off to an excellent start this season, but I haven’t been a fan of the Shaw story thus far. Castle I’ve had no complaints with thus far. Last year I wouldn’t have believed I would vote against… Read more »

Chuck is an AWESOME show. It is continuously funny and entertaining. And I must admit that I have never seen Castle.

Save Chuck is the greatest show everr!! I like castle too, but not nearly as close as Chuck.

I have never seen Castle, but we love watching Chuck every chance we get. He is funny and it is just a good clean show. I like the new things Chuck is able to do. Fantasy or not. Please keep Chuck on…..

Don’t watch either so I couldn’t care less. Hooray!!!! for Fringe getting a third season. Now hoping Heroes and Legend Of The Seeker get to come back next year.

Of the two, definately Castle.

Fringe has been renewed so we don’t need to worry about that anymore, and Medium has had a good run but there are times I think it’s in danger of ‘jumping the shark’, so definately Castle. Love Nathan Fillion. He is the most interesting actor to watch.

DO NOT CANCEL CASTLE, OMG what problems with this abc,,,listen, you need to leace well enough alone,, dont you people know when you have a good thing.. you need to leave the forgotten and castle alone.. they are two of the greatest shows on tv,,, please please please leave them both on,, use the brains over there at abc,,, thank you

Save Castle. It is one of my favorite shows

Hard decision to make, but it really boiled down to the recent changes made in Chuck, the romantic confusions becoming a drag on the action. I liked the nerd, could even stand the nerd becoming a hero, but Superman’s castoff? Oh, really.

I am a huge fan of both Chuck and Castle. Nathan Fillion and Adam Baldwin are why I watch the two different shows. But if I have to pick Castle has the better scripts and plots and Mr. Fillion is hot and funny so save Castle!