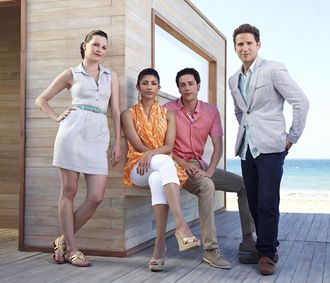 TV show description:
This medical drama is about a doctor who was kicked out of his hospital job because he chose to save the life of a “nobody” instead of a hospital benefactor. He reluctantly goes on vacation to the Hamptons with his brother the accountant. He then falls in to being a concierge doctor. He helps rich people that have too much money to go to the hospital, and also aids those less fortunate.

Hank Lawson (Mark Fuerstein) has everything going for him — a great job and a beautiful fiancee — until the bottom falls out. He loses his job, and consequently the woman he was going to marry, who seemingly only wants a successful doctor. Hank is often referred to as the “Medical MacGyver” as he always finds a way to get it done, no matter what the situation. At first, he resents those he meets in the Hamptons, as they represent the very people that got him fired. But, after living and working amongst them, he starts to understand his new community better.

Hank’s younger brother, Evan Lawson (Paulo Costanzo) is an accountant and the more manipulative of the two. He pushes his brother into accepting this position in the Hamptons because he dreams of the finer things in life. He’d do anything for his brother, including managing his concierge service. He also seems to resent and admire the fact that Hank can get nearly any lady.

Hank can’t do all the medical work on his own and needs an assistant, so he and Evan hire Divya Katdare (Rashma Shetty). She’s always very practical and efficient, but doesn’t really need the job. Her family is extremely wealthy, and they’d rather marry her off in an arranged marriage than have her working. As a result, she keeps the job a secret from them.

The other woman in Hank’s new life is Jill Casey (Jill Flint). She’s a hospital administrator in the Hamptons who knows how to move about the rich and famous to do her job. She also recognizes that the reason there are such things as concierge doctors is because her hospital is so undesirable. She shares the same principles as Hank and makes sure that Hank can help her out whenever he can. The two start a romance, but it gets hairy once her ex returns to town.

Series Finale:
Episode #104 — Uninterrupted
Hank and Evan snoop for clues about Boris’ disappearance until Boris makes a surprising reappearance in the Hamptons. He’s returned to wrap up his affairs at Shadow Pond, and has an interesting offer for Hank. Meanwhile, Divya receives news about her application to Johns Hopkins. And Evan and Paige grapple with a big decision.

Hank also treats Libby, who’s busy protesting the closure of a public beach access by a rich Hamptonite. Libby’s certain the jaw pain she’s experiencing is from all her chanting during the protest. But when Libby takes a turn for the worse, Hank realizes she caught more than just the protesting bug.

As Boris prepares to leave the Hamptons for good, Hank notices he’s suffering from joint pain. Fearing a return of Boris’ disease, Hank performs a medical work-up. But when it yields a surprising result, Hank has an idea of Boris’ plans for the future, as well as a surprising insight into why people have been after his DNA.

Meanwhile, Divya plans for her move to Baltimore, and Jeremiah navigates the beginning of a relationship with C.G. As everyone begins to move on with the next chapter of their lives, Hank struggles to figure out what’s next for him. But after plenty of soul-searching – and despite many new opportunities nearby – Hank decides to make a change as big as the one that brought him to the Hamptons in the first place. (Courtesy USA)

What do you think? Do you like the Royal Pains TV show? Do you think it should have been renewed for a ninth season?

A very enjoyable show with good balance of drama, pathos, and comedy. I was hoping for one more season but that seem to be writing a good ending- hopefully open ended for a short sequel(?).

Love the show, very creative. Have to wonder why they are cancelling. One more season please.

One of the best shows on TV…why cancelling? I have seen ALL of them.

One of the shows I looked forward to see. Just wished there we more episodes per year. Netflix where are you?

I thoroughly enjoyed this program, but feel that it is about time to end it; as it has used up most of its possibilities for interesting episodes. Not many series can have the durability and longevity of a M*A*S*H*.

Wonderful show! So sad that it’s being cancelled. It’s wholesome…no murder, swearing, rape, racial issue…kind of make you long for summer vacation…bring it back!

Don’t cancel. It is one of the good ones every time a discent show is on some dummy thinks it’s time to but anther show that a family can’t watch on.boo net work

Will miss the show! All of the actors were great in their parts. My wife and I met Mark Fuerstein at an event. Most gracious and a beautiful wife. The backdrop of the Hamptons makes us want to visit. Best of luck to the cast and crew on your future endeavors! We will be watching for you!

I loved this show and will never understand why they cancel shows that people obviously love!

Love Brooke and Reshma, and of course, the Fonze. Great entertainment. Tired of investing in shows just to have them cancelled. Boohoo.

Musical aspect is totally ridiculous. What drugs were the writers and producers on? Unimaginably awful. A slap in the face to previous seasons.

Sorry, R. Miller, but I thought the “musical interlude” was a great break from routine. Also thought it was fun and well-done–and apropos to the wedding episode.

I am so disappointed that I won’t be seeing it again. I loved all of the characters and storylines. A first class comedy/drama.

Yes, so sad I really looked forward to it every week. So thought provoking.

I have really enjoyed this show. Sad to see it end.

I am sorry to see it cancelled; like finishing a good book it is like losing a good friend