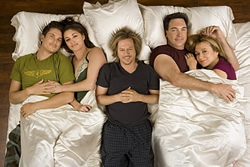 They discover that relationships are like a roller coaster — people can describe the ride to you, but you really have to experience the ups, downs, and thrills for yourself.

Series Finale:
Episode #100 — 100th
Surrogate Brenda gives birth so Audrey and Jeff will have their baby, Shea. Actually, they’ll have two babies because they discover that Audrey is now pregnant.

Russell is to blame for a bureaucratic glitch that causes Timmy’s work visa to expire. In a rare selfless act, Russell proposes to Timmy and marries him so that he can stay in the country.
First aired: May 20, 2013

What do you think? Do you like the Rules of Engagement TV series? Do you think it should have been cancelled or renewed for another season?

I TOTALLY WANT RULES OF ENGAGEMENT TO RETURN TO TV…I ABSOLUTELY LOVE THAT SHOW..PLEASE PLEASE BRING ORIGINAL CAST BACK..!!

Loved that show. Wish it was back.

I usually don’t complain about TV shows. We’ve been watching reruns. My husband likes the show I find it irritating. This show had all kinds of continuity problems. The finale was awful. Timmy had said he had been a citizen for 10 years. I can see Russel hurting Timmy but I can’t see him helping him. Timmy would be crazy to agree to marry him. How would they prove the marriage was real. Once the abuse was revealed no judge would grant him an extension. It would have made more sense for Timmy to return to South Africa.

Hi GJ, Everybody is entitled to their opinion of the show, however, I have a problem with your comments about Timmy and Russel’s relationship – you seem to have forgotten – IT’S NOT REAL!!!!!!!!!

Please bring back this show. It was funny and getting good. Adam an Jen just got married. Jeff an Audray had a baby and Russell an Tim are married. Would like to see what happens to them

My wife and I wait for the weekend to be over so we can sit and enjoy a real, good, funny show…as Jeff says ” COME ON ” put it back pleeeeeeeeeeeeease

Love this show. Would love for it to come back and see how Jeff and Audrey handle being parents.

I really thought this is a much better sitcom than most of the stupid ones that seem to go on and on. PLEASE TRY TO BRING BACK THIS SERIES. with the original cast!!

Bring back rules of engagement it is the best even ones I have seen loads are still funny!! And I need to know what happens with Audrey being preggers!!!!!!!!

This is the funniest show I’ve seen in years…why would it be cancelled. So many other shows on CBS could be cancelled instead of this one. At least you can re live the laughs on netflix. Show had great chemistry between the characters

You need to bring rules of engagement back!!!! Love this show!! Watch every rerun and cannot believe it was cancelled!!! Why??? Very disappointed!!

Please bring this show back. It has so many possibilities to continue the show. Love this show. Cannot believe the fools that decided to cancel!!!

Never ever should have been cancelled!! Let me know who the moron was that approved the cancellation so that I can cancel his ass! I’ve just recently discovered this show and it is so refreshing , funny and well acted. I’m so sad to have just found out it was cancelled two years ago. So sad. I would give anything for one more season.

i thought this show was one of the greatest sitcoms on tv. i wish they would have kept it going or at leasat had a good spin-off from it. all the actors were great and funny. will miss all of them

I agree! And I miss them too.

Why would you cancel one of the best shows on TV? I can list a number of shows that should be, but NOT this one.

It’s totally funny! And what could you possibly know about comedy? What do you know?…you’re a military freak!!….sarge