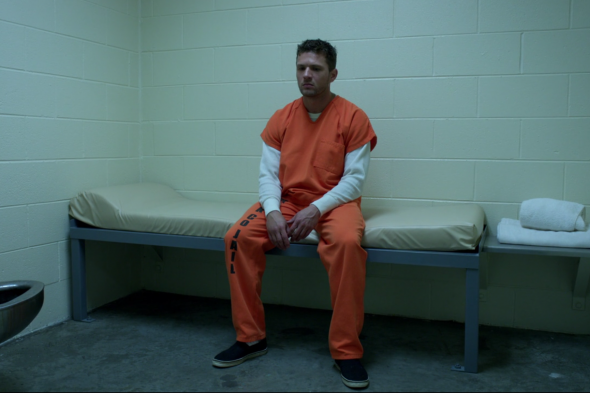 Last night marked the end of the first season of Secrets and Lies (it may be the end of the series as well) and many viewers were less than pleased about how it ended.

In the finale, we learn that Abby killed Tom and says that the two kids had planned to run away together to be rid of their turmultuous households. She says that he wanted to go back, she panicked and accidently killed him wiith a flashlight. Ben decides to protect his family and take the rap for the murder. Cornell knows the truth but can’t talk him out of it. Abby goes free and Ben goes to jail for a crime he didn’t commit. The twist is that Abby killing Tom wasn’t accidental. Her murder of Tom was brutal and premeditated. End of season… or is it?

In an extra scene released by ABC, the story picks up 14 months later. It’s Natalie’s 18th birthday and she and Dave are quietly celebrating at a coffee shop. Cornell walks in and tries to convinces Natalie that she finally needs to clear her father’s name. It seems like Natalie will testify. Unfortunately, it sounds like Ben has died but Cornell doesn’t explicitly say that. In the final moments, we see Cornell approaching Abby and her mother as they’re on a shopping trip. Here’s the video:

What do you think? Do you like the extra scene? Would you like to see more of these characters or has this story been wrapped up enough for you?

Where in the ending did it say he died ? I’m confused!!

I love this show it’s really good I hope they fallow up with the story and finish it off. The season finale was more like a
Teaser for the second season .
Really good show though can’t wait for the next season to start.

i agree on all points except the confusion part. never a statement about his death, so think we will actually find out what’s in the works next season. altho not one of my favorite shows because the acting of the protagonist and his his wife and his buddy is just okay, i look forward to seeing what happens in season 2.

I would love to see more of this show…..these characters. Loved every minute of it….. I did not like how it ended however…..no one likes an ending that really isn’t an ending. Please bring it back….only Sunday night TV show worth watching.

An amazing story — amazing characters and amazing entertainment! This last scene finished it for me. I would love to see Detective Cornelle do her thing again with another amazing story!

Liked the extra scene. MOST DEFINITELY want to see this show continued into next season.

Like the extra scene,but not a good ending…..need to see more! Please continue the show!

please finish the final, we have been waiting to see how it ends

NOO!! please finish the finale . I agree with evelyn no closure. n this was jus a tease..
=[ this is such a good show I don’t understand why yall don’t got more viewers cause such a brilliant story. love his story .
two thumbs up . 100%.

I’m still waiting on the finale! That extra scene was nothing but a tease, I thought that it would be the last episode but it was over?? Huh, Really! There was no closure. The show was suspenseful but it’s ending did it no justice!

Ben dies? that is so wrong keep the story going there so much they [the writers] can do with the story and characters.

I do not like the ending. I just hate cliff hangers. I want to see Abby pay for what she did.

The extra scene is better than no scene at all, but it is abrupt & shows no closure. Whether good or bad the story a definitive ending since it is not a too be continued show.

Need to continue this series and show Ben was innocent and charge Abby.

I don’t think that added scene made it look like Ben died and that entire scene should not have been presented if they were not going to follow it up with a conclusion. They should have left the show with the ending of Ben in prison and his wife and daughter leaving town.

Need more with season 1 characters . Need to know how Ben dies and what happened to Abby after Natalie testifies against her

Need more to this ending. It was left unfinished.