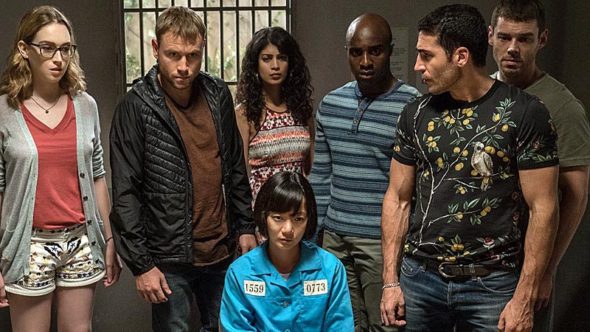 The series finale of Sense8 launched today, June 8th, but what was it like shooting the Netflix movie? Recently, EP Grant Hill spoke with EW about the two-hour special.

In the interview, Hill said the creators of Sense8 wanted a fitting ending for the cancelled Netflix series:

The aim of this finale episode was promoted by a couple of things. We and Netflix felt that leaving the series’ followers with an ending that didn’t finish out the show left a vacuum. We had, obviously, a lot of support from very vocal fans, and they felt it. So we just decided that, all right, if we’re going to do it, we have to do it really well, and the feeling of it has to mirror the feeling that the series had had. And we had to shine a light back in some ways to some of the characters that we haven’t seen for a while, and basically end up with something that was really positive, that was high energy, and that would feel fitting for the end of the series.”

Later, the EP revealed they only had two hours to shoot the entire last 30 minutes of the movie:

We only had it for six hours. On the day [we shot], it was raining when we got there, and that [shooting time] was reduced down to about two hours, so that whole sequence was shot on the Eiffel Tower in two hours. The weather just broke for two hours and then it started to rain again. As we were shooting it, there was so much energy in that that it felt like the last thing [we worked together on].”

And what does Hill hope people take away from the Netflix series?:

We’ve always put great value on including people, including other people. We try and make it positive, we try and make and have people understand that acceptance is powerful and much more uplifting than anything else. We want it to feel hopeful. You don’t know where it’s all going but you know it’s too bleak out there at the moment, so we wanted to push it in a hopeful joyous way. There’s nothing more complicated than that.”

What do you think? Are you a fan of Sense8? Have you seen the finale yet?

This must be very successful show, because I’m only commentator.