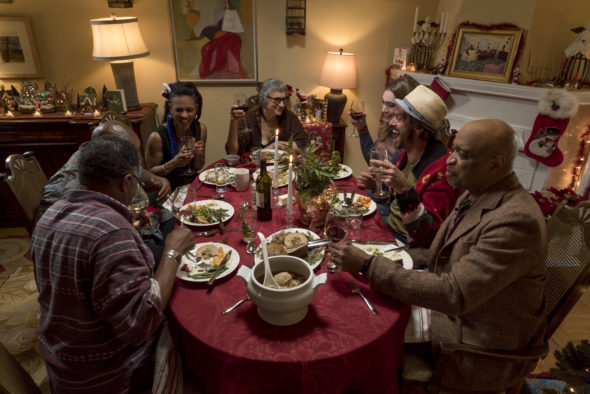 The Sense8 TV show was cancelled by Netflix after two seasons, on the heels of a brutal cliffhanger. The streaming service isn’t totally heartless, though. They’re bringing it back for a two-hour special, which will hopefully provide the audience with some closure. Now, we can report the Sense8 TV series finale will premiere on Netflix on Friday, June 8, 2018 at 3:01am ET / 12:01am PT

Additionally, star Miguel Ángel Silvestre posted about the cancelled TV show’s finale on his Instagram account. Check it out.

The final, feature-length episode of Sense8 will be a “fantastic, fitting conclusion” for fans according to Netflix’s vice president for Original Content Cindy Holland.

The Netflix exec said that the streaming service was “happy to be able to support” the final episode of the axed sci-fi series, but explained that in the end the decision to cancel Sense8 was based on the viewing figures not matching up to the budget required to continue making the show.

“We’re really pleased to provide an ending for Sense8. For us, I still take those decisions [to cancel] very seriously when we’re making them,” Holland said during Netflix’s See What’s Next series showcase in Rome.

Explaining the decision to cancel Sense8, Holland said that the decision was based on having to balance “audience size and budget”.

“At some point if you don’t have the viewership showing up to justify the expense of the series, you’re going to want to end it,” she said.

What do you think? Are you a fan of the Sense8 TV series? Do you think the planned Netflix finale special will help you come to terms with the cancellation?

My whole family loved this show. Really sorry it will be ending but thanks so much for giving us a ending instead of just now coming back and leaving us hanging.
Best of luck to everyone involved

Thank you Netflix for giving the story a chance to close off and more time with the characters. Honestly, the takeaway for me (as a fan) is how much support they gave the show post cancellation of season 1 and the love of the fans. Really enjoyed season 2 as well but wow, season 1 is for sure one of the best series i’ve ever seen – it’s so epic, bonkers and beautiful. The way characters felt like they lived in different genres of film, the use of art as a throughline in scenes, the acting and the laughs…just so… Read more »