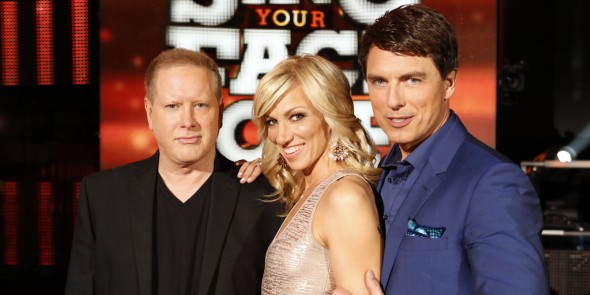 TV show description:
Hosted by actor and musical artist John Barrowman, this talent/variety show competition features various celebrities as they are transformed and trained to perform as a legendary musical icon.

They undergo hours of makeup, dance training, and vocal coaching to transform themselves into the musician. Echoing the icon’s walk, mannerisms and performance style, the celebrities then peform and compete in front of a live audience and judges Debbie Gibson, David Allen Grier, and Darrell Hammond.

Series Finale:
Episode #6
In the finale, Rinna performs “Material Girl” by Madonna and Fields performs “Tutti Frutti” by Little Richard. McClain performs “The Greatest Love of All” by Whitney Houston and receives votes from Gibson and Hammond. Special performances: Lovitz and Bach perform “Sexy and I Know It” by LMFAO, and Gibson and Hammond perform “I Got You Babe” by Sonny and Cher.
First aired: June 14, 2014.

What do you think? Do you like the Sing Your Face Off TV series? Do you think it should have been cancelled or renewed for a second season?

I just found this show,saw three episodes,now I can’t find. What happened??

This was so unfair for china to win because she was a singer. All the others worked hard as well and didn’t win! China would win because she’s an awesome singer and performer. This show should not allow any more singers to make t fair

i think should be renewd its a great show

accidently stumbled across the show and found it refreshingly creative, entertaining and funny…have got a few others hooked and wanting to see more…even with all the singing shows on TV this one was so different hope it makes a go of it!!!

Love Love Love this show I hope they renew. Finally there is a show for the whole family it’s very entertaining! Keep up the good work abc.

I really liked it. It was very entertaining especially Jon Lovitz. I hope they keep this one around.

Loved the show. Hope it is renewed. Host and cast were great. Was so much to watch.

Great concept! They need 4 judges though. I thought it was sad and lousy, they didn’t even let Carmen give her choice! They should let viewers vote like AI!
I love the concept! Great family show! Great performances!

RENEW! RENEW! RENEW! This show has been so much fun to watch.
More, more, more! Looking forward to seeing a new season.
Great Host, Great Judges!
RENEW this show… it has been So entertaining!

Love this show! Sure it’s somewhat low production compared to the other talent shows but it showcases excellent talent from those in the industry not known for singing and transforming to a tribute character. Have got three other friends addicted and. More to cone if the show can continue. Well done without the drama, junk, special effects of other talent shows. Thank u.

Love sing your face off!

Great show for the whole family. Wish it had been placed in a better day and time slot so more people would have seen this wonderful show. I hope they renew it for more seasons. I loved it a. It was different from the other singing competitions. It had great talent and was so funny to boot. I have told all my friends about it and they have watched it on you tube and they loved it too. PLEASE RENEW