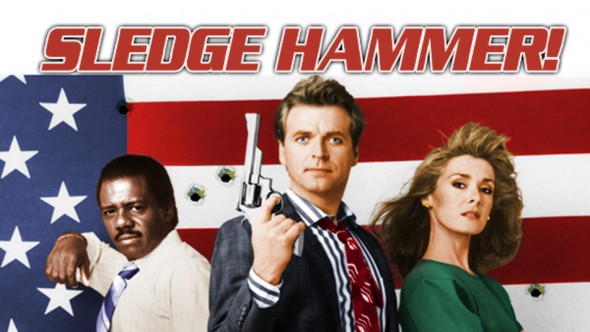 The comedy originally centered on a group of over-the-top cops working in San Francisco. The cast included David Rasche, Anne-Marie Martin, and Harrison Page. The show ran on ABC for two seasons between 1986 and 1988.

During a recent interview, Spencer revealed he’s been approached for Sledge Hammer! reboots in the past:

I’ve received inquiries about movie versions and TV remakes over the years, but it was mostly people explaining to me what my own series was about. The only thing we agreed upon was that it was about half an hour.”

And now, the series creator says he’s ready to revive the ’80s comedy:

I’d only want to do an update for new media or cable with the freedom that allows, so I reached out to co-chairman of Fox TV, Gary Newman, who’s been very helpful and put me in touch with some smart executives over there. We’re currently having productive conversations.

I was watching a political round-table after Trump advocated arming teachers in schools, and one of the pundits mentioned how the president sounded like Sledge Hammer.”

What do you think? Are you a fan of Sledge Hammer!? Would you watch a reboot?

I’ve been waiting a long time for something to come of this .was hoping to see sledge’s off spring maybe claw or toffee who grew up with the many notes and then is let loose on the world ..oh if only pipe dreams came true lol ..

We’ll need to revive the Sledge Hammer Podcast if this happens!

Sledge is a ledge have watched both seasons atleast 5 times and still can’t fet enough, is truly one of my favourite shows of all time!! And trust me I know what I’m doing… scumsucker 😉