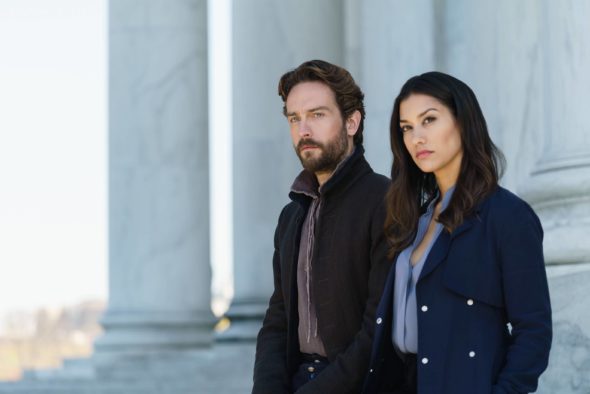 FOX has not yet announced whether they will renew Sleepy Hollow for a fifth season or not. The odds seem slim though. This is the first season since the show killed off a major character, and the ratings seem to be suffering because of it. So far, season four is averaging a .50 rating in the 18-49 demo with 1.944 million viewers. For comparison, season three averaged a .83 rating in the 18-49 and 3.07 million viewers.

The season four finale of Sleepy Hollow is slated to debut on March 31st at 9 p.m. ET/PT.

Read the episode synopsis below:

ALLIANCES ARE TESTED ON THE ALL-NEW SEASON FINALE OF “SLEEPY HOLLOW” FRIDAY, MARCH 31, ON FOX

What do you think? Do you watch Sleepy Hollow? Do you want a fifth season?

Cancel it . It is ruined and the kid can’t act.

Love that show. Please bring it back for season 5

I love this show….I do miss Abbie….but please don’t cancel it…I’m adjusting to the changes and I believe everyone else will too…They are doing a great job!Don’t cancel please!

Please please please do not cancel Sleepy Hollow! It’s by far one of the best shows on tv.

please renew and bring Abbie back. The next witness was supposed to be a direct bloodline to Abbie. Not a ten year old girl.

Absolutely keep it running. I enjoy a good old fashion style show like Sleepy Hollow these days there are shows that should be cancell because of the languages that are spoken on tv that I wouldn’t let my kids to watch.

I love this season please renew!

I have watched from the beginning LOVE the show….!!!! I too miss Abby…I am hoping they renew this one..!!!!!

Yes , please keep this great show on another season!!! I really enjoy this series!!! I do miss Abby Mills. I was hoping Abby and Crane would hook up!