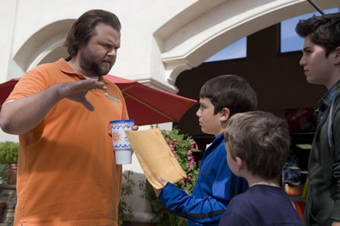 I was sad the see the show go. I loved it, it was funny, witted and the actors did a great job so please bring the show back.

I thought this show was actually humorous andone comical the actors were great and its actually humor that’s worth a **** and plus u normally on’t see three kids hiring a complete a dumbass for a father, its something new that u barely see, my vote a second season needs to be made one of the best ive seen so far

I never saw that show before in tell we got on a new added program we ordered. I hardly ever watch fox, because it seems they pull there show’s to fast. so why get hooked on one. this show was so cute!!! my son and I both watched it and never laughed so hard. I can not believe they took it off the air! if something doesn’t go as fast as the tv world thinks it should and its not racking in the money fast, they ax it!! my Granny use to say, all good things come to those that… Read more »

Really?! You people actually liked this piece of **** show! This was HORRIBLE and I for one am so glad that it is no longer on the air. This show wanted me to to stick a smoking hot poker into both my eyeballs. Good riddens!!

I watched all thirteen episodes, Funny! Comical ! Great comidic timing. Replaced it with American Dad? Really?….Hate to Beg But…..PLEASE BRING “SONS OF TUSCON” BACK ! and put it in an earleir time slot ! Thanks…

I just LOVED this show! There are so many other television shows out there that are just awful it’s just a shame when something comes along with real comedic value and no one gets it. Tyler Labine was perfect, and the kids were naturals. Said to see it go.

Very disappointed to see it go. We didn’t get a chance to watch when it was on air. However, we just watched all 13 episodes on Netflix and are fans. My sixteen year old daughter is very upset. It is the first show we’ve watched together that we both think is hilarious in a long time. That isn’t an easy thing to acheive with a teenager these days.

Network television simply isn’t worth watching. They’re wasting their viewers times by starting a show and then canceling it. They do this all the time in their hunt for money. Yes the show was good. Lucky for me I never watched Fox but they do suck even if you’re getting the shows elsewhere.