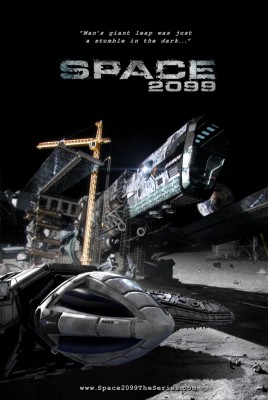 Back in the 1970s, Gerry and Sylvia Anderson created the syndicated sci-fi series Space:1999. Set some 25 years into the future, humans had established a research center on the moon and had been storing nuclear waste on the far side. After a massive explosion, the moon is ripped from Earth’s orbit and sent hurtling through space. The 311 men and women that are trapped on Moonbase Alpha encounter strange aliens out in space as they search for a new planet to colonize and call home.

Space: 1999 ran for two seasons and stars Martin Landau and Barbara Bain, a then-married couple who’d worked together on from Mission: Impossible. Barry Morse co-starred on the first season and season two saw the addition of Catherine Schell and Tony Anholt. Other castmembers include Nick Tate, Zienia Merton, and Anton Phillips.

The series never had a true series finale but a mini-finale was filmed in 1999 on a replica set and features Merton delivering a final message from Moonbase Alpha. There was talk around that time of reviving Space: 1999 as a series of movies (ala the Star Trek film franchise) but the project didn’t get off the ground.

For several years, fans of the original series have been working on an unauthorized project called Space: 2099 that would be set 30-40 years after the original.

Now, ITV Studios America and HDFILMS have announced that they are producing an official reimagining of Space: 1999. It’s also called Space: 2099 but is unrelated to the fan project. Jace Hall is the president of HDFILMS and is executive producing the new series. He was also an executive producer on ABC’s now-cancelled V reboot.

No specific storyline details have been released about the new series. In an FAQ, Hall notes, “Space: 2099 is a ‘re-imagining’ of the franchise. What this means is that while there will be some familiar elements from Space: 1999, Space: 2099 represents a new vision and encapsulation of the intentions and key axioms that made Space: 1999 so unique and wonderful. Our intention is not to alter, replace, or negate the original Space:1999 series is any way – but to simply bring something thoughtful and new to audiences that align with the overall fundamental story-telling intention of the Space: 1999 franchise in general.” 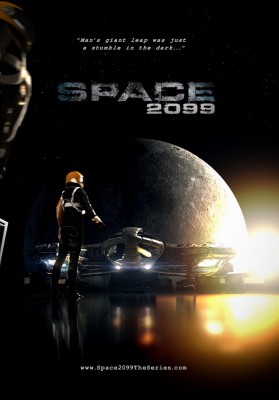 ITV Studios America and HDFILMS announced an agreement today for the development of “SPACE: 2099” – a complete reimagining of Gerry and Sylvia Anderson’s award winning and popular franchise “SPACE: 1999” which originally aired in the mid 1970’s, it was announced today by Paul Buccieri, Managing Director of ITV Studios International and President and CEO of ITV Studios America and Jace Hall, President and Founder of HDFILMS Inc.

Hall, also Executive Producer, is at the helm of the creative effort and is working closely with ITV Studios America to realize the full potential of the story and franchise. HDFILMS Inc. focuses on creating premium online content as well as film, television, and videogames. As the development visionary and Executive Producer of the recently re-imagined “V” television series on ABC, Hall has been the driving force behind numerous creative projects across many media platforms.

According to Hall, “This is a rare and exciting creative opportunity for anyone involved in storytelling and one that I am honored to receive. Science fiction is a powerful format capable of visualizing the human condition in thought-provoking ways. While we are indeed re-imagining the franchise and bringing something new and relevant to today’s audiences, I feel strongly that some of the overall tones set by the original “SPACE: 1999” television show represent an exciting platform to explore possibilities.”

Buccieri said: “After more than 35 years, we are thrilled to be developing a new vision of our much beloved franchise for audiences worldwide. Historically, the “SPACE: 1999” brand has entertained and fascinated millions of people. We are enthusiastic about the vision that Jace Hall and his team at HDFILMS have created and we’re very excited to be working together.”

ABOUT ITV STUDIOS AMERICA
ITV Studios America, the US based production entity of ITV Studios in the UK, is one of the largest international producers for the US market and a major force in acquiring, developing and producing reality and scripted programming for US networks. ITV Studios America has a slate of formats in production with major networks and syndicators, including Hell’s Kitchen, Kitchen Nightmares, First 48, After the First 48, Steven Seagal-Lawman, Four Weddings, Fat Chef, My Ride Rules, On The Fly, The Bill Cunningham Show, America Now and The Jeremy Kyle Show.

ABOUT HDFILMS INC.
HDFILMS INC. is a production company primarily focused on creating premium online content as well as film, television, and videogames. As the development visionary and Executive Producer of the recently re-imagined “V” television series on ABC, Jace Hall has been the driving force behind numerous creative projects across many media types.

What do you think? Are you looking forward to seeing a new imagining of Space: 1999?

I loved the show! I liked the first season a lot better than the first although the second season improved dramatically with the final (5) episodes. I was wondering if the revival is still in the works. It has been two years! What’s up?

so very excited to see this new series. But i also hope that eric bernard’s remastering is allowed and his new series green-lighted. Lots of room in the wordwide syndicstrd market for all of this. And much much more.

I’ve been watching the old series and really can’t see why this show doesn’t have the fan base like Star Trek. For a show done in the 70’s the effects were great, the plots a little outlandish but fun and creative. Compared to the original star trek I just never hear of this show.
It seems it should have a bigger fan base. I would love to have it re done, maybe it will make many new fans, ans awaken people to this lost treasure.

It’l be **** in all reality, the original is quite the best.
I do not look forward to this at al, cgi crap! Cgi people! Cgi bloody this that and the other, itl get ruined and be imagined badly.

Is it too much to hope it is like the first series of Space 1999? The metaphysical stuff was cool. When Fred Freiberger took over after destroying Star Trek, he did the same to Space 1999 with equal ease.

I remember reruns of this on syfy channel when they were just starting out on cable. I thought i was delightfuly campy. If they remake it though they may need to adjust it a little for more jaded audiences.

There is a common misconception that, in the show, the Moon was blown out of orbit by a massive explosion. This was not helped by the new opening credits of the second series. However, if you re-watch the first episode you will notice that this was not a single explosion, but in fact a gigantic nuclear “blowtorch” which pushed the Moon out of its orbit and kept on accelerating it for quite a time until it eventually “ran out of fuel” and gravity returned to normal. Technically, the Moon also did not leave orbit straight out of the system but,… Read more »

2099 was the brain child of a Canadian Film maker, Eric Bernard, who came with this idea way back in the mid 2000s and not only did he remastered the original shows to be Space 2099 with enhanced SFX (like CBS did for Trek TOS ) but he also re-edit the dialogue to move dates and mistakes about history – http://youtu.be/wPTZaSv9Bxk , But he, also with fan support and one of the writer of the original series, came up with a sequel to the original series set 40 years after 1999/2099 with the idea of having original cast members and… Read more »

YES! One of my childhood favs. Loved the first season, although I’ll concede that Catherine Schell was hot as Maya.
Love the Eagles! Hope you can also fit in a few groovey, Tang-colored planets.

Excellent news! I enjoyed that show. It would be interesting to watch it again!!

I’ve never seen this, so I’m all for a revival, though I’m really wondering how long it would be before the loose moon got pulled into Jupiter and destroyed, hehe. But hey, suspension of disbelief is a prerequisite for sci-fi.

There’s suspension of disbelief, and then there’s Space: 1999! In the original, our moon (which for unexplained reason is never referred to by its name, Luna, but always “The Moon”, as if there is only one) was accelerated to frankly impossible speed, and left our Solar system within minutes. The series’ writers had apparently no scientific background whatsoever, and made many serious errors of fact throughout the series that even attentive grade-school kids couldn’t overlook. Don’t get me wrong, I loved the series’ production design including sets, props, costumes, miniatures and special effects; but I also agree with contemporary and… Read more »

I can remember it being on, but really didn’t hit my SciFi stride until about 10 years later. I definately look forward to the reboot of the show. I am still missing the new V, thought it was better than the original, and that is saying a LOT. I really loved the original and watch it whenever they play it in reruns now. Sounds like, if they do it right, this show could really take off.

I’m thrilled that “Space: 1999” under its new title of “Space: 2099” is in the planning stages. From the title, I assume that it will take place sometime in the Alpha future. I wonder if it will be populated by their children and their children’s children or the original characters, being perhaps the moon is traveling at a rate near the spedd of light (hey it’s SF) that time has slowed for them. My concern is that the two seasons were quite different. I hope that the best of both seasons and characters (if based on the original characters) and… Read more »

I still have an original die cast toy of it. I just love its design. Cockpit looks good from the poster, but wanna see the rest! 🙂