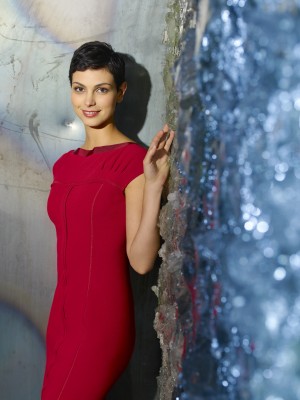 Sadly, the Visitors aren’t among us any longer. After two short seasons, ABC has cancelled their V TV series.

A reimagining of the original V, this series tells the tale of what happens when an advanced alien race arrives of Earth professing their desire to help mankind. Fortunately, not everyone trusts them. The second season features the talents of Charles Mesure, Elizabeth Mitchell as Erica Evans, Joel Gretsch, Laura Vandervoort, Logan Huffman, Morena Baccarin, Morris Chestnut, and Scott Wolf.

For season one, V ended up averaging a 2.25 rating in the coveted 18-49 demographic and 5.7 million average viewers. It was “on the bubble” but ended up being renewed for a 13 episode second season. The network was hoping that the show would catch on and the ratings would improve.

ABC later reduced the episode order to just 10 installments and debuted them mid-season. Unfortunately, ABC’s gamble didn’t pay off. Season two of V ended up averaging only a 1.9 in the demo and 5.49 million viewers.

Though the network and producers maintained that the show was still in contention for next season, it was clear that there would only be a third season of V if ABC was willing to gamble once again. In the end, they weren’t.

ABC confirmed today that V has been cancelled after two seasons and 22 episodes. The series finale aired on March 15th and, unfortunately, there were lots of unresolved cliffhangers. Hopefully the producers will someday share what they had in mind for season three.

What do you think? Are you sad that V won’t be returning next season? Why do you think the series didn’t catch on?

Such a shame to cancel this… I watched both the original and this more modern version, at the times they were aired… There’s no doubt that V was a brilliant sci-fi show, the final storyline had oodles of possibilities… Someone please bring it back!

Why didn’t Marc Singer play his original character in the new V series.
The original V series may have been made in the 1980’s, but when I was at junior school in the late 70s, one of my school friends had a toy V shuttle and figure.
They should definitely continue the V series indefinitely, maybe Michael Ironside will also join fellow original series cast members Mark Singer and Robert Englund who play William (also played Freddie Kruger in Nightmare on Elm Street trilogy)

All this canceling of shows with many storylines left open with no,closure, make me NOT watch ANY NEW SHOWS coming out. This for the reason, I am afraid to,get interested and hooked on one, then…poof,…it’s gone, and viewers are left hang with nothing…. WILL WATCH NEVER AGAIN ABC….

It got bad ratings probably because of the era when it aired, an economic meltdown, during a massive shift in the way people think of the system. I remember I stopped keeping up with it because of some stupid comment they made about ‘universal healthcare’. It gave me some West Wing vibes and by that time I already knew how stupid that show was. I visualized the type of pampered yuppie that writes that crap, uses a serious issue as a throwaway line that ultimately says nothing. Turned me off at the time. I only recently watched it and I… Read more »

You should of finished what you started, no matter the cost of budget. The decision to cancel the show is enological & you need to get back into production to give this show a proper ending it deserves. What a farce, how do you expect any ratings?

How could you left such a good Si Fi up on the air like that.Please reconsider.Will all the later tech you could make it even better

Absolutely ridiculous no season 3 come on the series does have a cult following get your fingers out and do season 3. What is wrong with you. We are all left hanging on a cliff edge. Get it done.

it’s sad there will be no season 3. I hate that the aliens have won… because thats what it is, if there is no season 3.

waiting eagerly for a solid continuation it’s dropped halfway !Audience at a loss not knowing the rest .. Possibility there please produce episodes for the 3 V series …even after sometime ,I would like to see Mark singer actors ‘ involvement in the series very much.