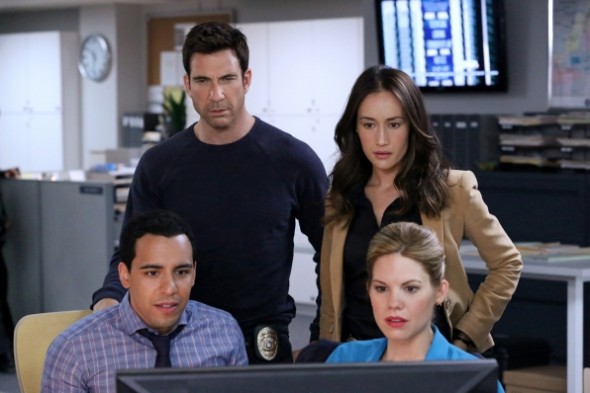 Detective Jack Larsen (Dylan McDermott) is a recent transfer to the Unit from New York City’s homicide division. His confidence, strong personality and questionable behavior has landed him in trouble before however that past behavior may also prove valuable in his new job.

His boss is Lieutenant Beth Davis (Maggie Q) — a strong and focused expert in the field. She’s driven by her traumatic personal experience as a victim. The two work with young and eager Detective Ben Caldwell (Victor Rasuk) and deceptively smart Detective Janice Lawrence (Mariana Klaveno).

Larsen and Davis and their team assess the threat level of cases and respond before the stalking and intimidation spirals out of control — all while trying to keep their personal obsessions at bay.

Series Finale:
Episode #20 — Love Kills
A search for an elusive serial killer leads the TAU to a shocking revelation. Also, Vicky learns some startling information about her ex-husband.
First aired: May 18, 2015

What do you think? Do you like the Stalker TV show? Do you think it should have been cancelled or renewed for a second season?

Please bring it back, I really liked this show! Plus it was a way to reach those in the audience who might have a stalker and give them the courage to go to the Police for help.

Please bring back, didn’t know it was cancelled.

I wanted it to come back on too! it was awesome!! Please bring it back even the cast was good!

I was waiting for the show to come back… My co worker told me that it has been cancelled, but why? Its one of the best thrilller series – the season finale was a cliff hanger and viewers (like me) want some answers… If they decided to cancel the show, they should have at least make a good ending for the season, not like that. I really like the show and I hope they bring it back…

I agree w/Sara L. Stalker was a great drama and I was really looking forward to
it this Season. Hope you change your mind and re=new it for 2016 and then some. Thanks

Please continue the Stalker series, season one’s finale is a ‘cliff-hanger’ and needs another season!!! I really enjoyed watching this program and would definitely watch more seasons!

Please put this show back on! It was extremely entertaining with some wonderful plots and characters!

I don’t know WHY you take all the good shows off the air BUT yet leave these so called reality shows on. NOBODY cares about that junk I don’t care what other ppl do in their life anyone that has respect for themselves and their family would not put their personal life for the world to see on tv. I won’t watch those types of shows they’re more fake than normal tv shows!!!!

I saw Stalker and i think it’s a great thriller series, for me You have to build up soon the second season, I don’t understand this decision.

It was an awesome show I literally would run home just watch staljer. I’m so upset that it has been cancelled it is one of the best shows that I’ve seen in a long time.

I think CBS tops the list for bad choices in cancellations. Now my Mike & Molly is getting axed too!

So sad it was cancelled. I loved the show. How do they make this decision. Some of the shows that have been renewed are not good ones.

I really enjoyed this show! Sad it was cancelled.