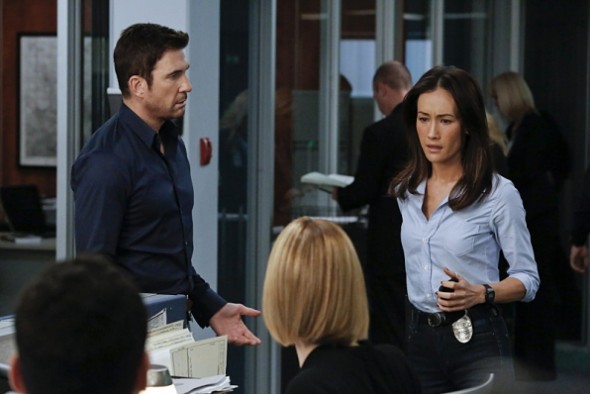 CBS recently dropped Stalker from their schedule and replaced it with a new TV show, CSI: Cyber. Now, there’s word that it’s coming back on the air — but for how long?

After airing 17 of the show’s first season episodes, CBS took Stalker off the air. However, according to star Maggie Q, fans will get a chance to see the remaining episodes. She recently tweeted, “That’s a wrap on Stalker Season 1! We are back on the air at the end of the month! Thank you so much for your support!”

So far, there’s been no official word from the network regarding the unaired episodes. That seems a little unusual considering there’s less than two weeks left in the March.

While it’s good news that viewers will (hopefully) get a chance to see the remaining unaired episodes, it doesn’t change the fact that Stalker’s unlikely to be renewed for a second season. The ratings have been a disappointment at best and, so far, CSI: Cyber’s been doing much better in the same timeslot.

What do you think? Will you be watching the remaining episodes of Stalker — whenever they air? Do you think the series should be cancelled or renewed?

I never missed an episode. It was just so good and so different. I was shocked it got cancelled. Please bring it back.

I am truely gutted that season 2 has been cancelled, it seems that every time a decent program comes on it gets cancelled, i also know quite a few other people are extremly dissapointed about it being cancelled. And what makes it worse it that its been left on a huge cliffhanger, and now never going to know what happens which is stupid, how can it just be left like that. So frustrating

I definitely would watch the last episodes and a season 2. This show was very good all the way around from the actors, story lines and suspence! CSI:Cyber most definitely was boring. Please bring back Stalker, loved that show.

I loved Stalker… Please bring it back it was such a great suspence thriller tv show , very gripping and loved the acting cast and looked forward to watching every week.

Great show!! MIss it a lot. Cyber whatever, was boring. Stalker had really good story lines, it kept you on the edge of your seat. Stalker, Criminal Minds, and the CSI’s I watched. Stalker and CSI are gone. Criminal Minds lost good actors, I haven’t watched since HOtch left. So I don’t even watch anything on CBS. I will keep checking to see of they put Stalker back on, then I will tune into CBS.

I love Stalker, it has a good story line, its gripping, , and the acting is believable and I enjoy following it weekly, its such a disappointment that it came off screen so abruptly!!

I loved this show it was such a shame that CBS took it off you people forget that we dvr lots of our shows or look at them on demand, bring us the final episode please. lots of shows cancelled had us hanging with no ending. thank you.

I totally loved the show. All of the actors as well. I was so disappointed when they stopped it. It was one of my favorites. I keep it in my Que in case it starts again.

I loved the show, I was very disappointed when you took it off the air….I looked forward to watching it. I do not watch much TV but I did enjoy Stalker ! Please consider a different network?

Absolutely gutted this show will not be making a come back for season 2 loved everything about it, the songs they played at the end of every episode, the team and the storylines had me terrified