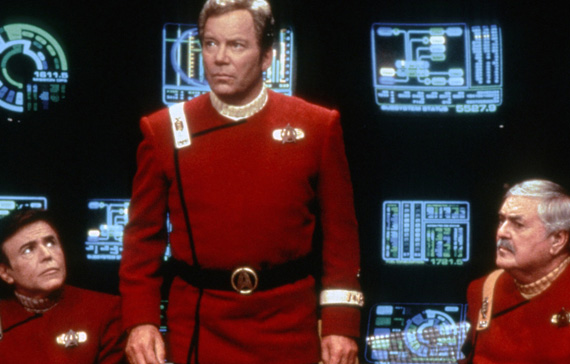 Shatner, of course, originated the role of Captain James T. Kirk for the first Star Trek series, which ran for three seasons between 1966 and 1969. He went on to reprise the character in several feature films, concluding with 1994’s Star Trek Generations in which Kirk died.

In the interview, Shatner said he would like to appear in the next Star Trek film as a young Captain Kirk. But how? With special effects, he says:

I recently connected with a virtual reality company Ziva and they have virtual-realized me in 240 cameras all around shooting me. … So they can now produce my body and my face in any way, shape, or form – including what I was like 50 years ago.”

However, it’s unclear how Shatner can reprise the role of Kirk in the new Star Trek film since the current franchise takes place in an alternate timeline from the original series and Captain James T. Kirk is played by Chris Pine.

Still, Shatner thinks it’s possible for there to be two Kirks:

What an interesting role that was and what it could be 50 years later: Captain Kirk is caught somewhere in the byways of the universe.”

What do you think? Are you a Star Trek fan? Would you like to see Shatner in the next film?

It would be thrilling to once again see William Shatner back on the helm of the Enterprise. I would want to be one of the first in line for that movie. He can make history and boldly go where no man has gone before.

Bill, you are a great actor, but give it up. It’s time to pass the torch.

Shatner never surrendered the notion of playing Captain Kirk. As soon as Kirk was killed off in Generations, Shatner proposed a number of options to the moviemaking powers-that-be for resurrecting the character. That didn’t happen, so he wrote/co-wrote three trilogies of books/audiobooks, published between 1995 and 2007, that chronicled the continuing adventures of James T. Kirk. As for bringing him back in the current reboot, they did it with Leonard Nimoy as Spock, and they could certainly do it with Shatner as Kirk. I’d love to see it, personally.