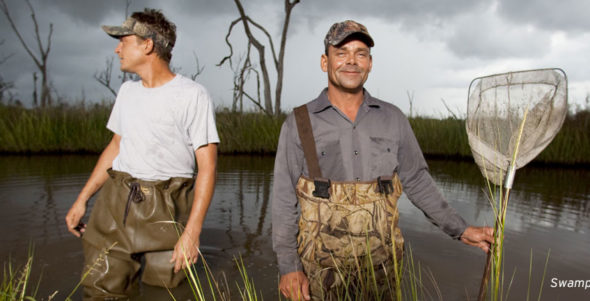 What do you think? Are you a fan of the Swamp People TV series on History? Will you watch season eight?

I’m very sad that u took Swamp People Off the Air my husband & I have been watching it from the very first time it came on T.V.. We Love to see all the Alligators an the way they catch them an how big some of them are an to top it all off Gator Liz an her daughter Jessica was very good Mother-Daughter Team they didn’t hold any pushes back they just went right out there an got the gators like the guys no matter the size..Now Troy & Landry Boys are favorite if I had to choose But… Read more »

I am a Big Huge Fan of the Reality Show Swamp People,I love to watch this show it’s exciting and educational to know that these brave Men and Women have mad skills and knowledge of how to catch and sell Alligators to make a living my favorite alligator hunters is the Landrys,the Edwards, Liz Cavalier,and Molinares I even grew on Davis Ladart and his Step son Jeromy, I so enjoyed there competive,wacky antics ,and the seriousness,about the Fun of catching Almost Ancient REPTILES THAT ARE OLD AS TIME AND TO SUSTAIN THE ECO- SYSTEM OF THE SWAMPS IN NORTHERN AND… Read more »

Yes I will probably watch season eight but I do miss the old crew. I like luz, willie , jeromy and David. I like the two young boys with Glenn also. The new show isn’t as good.

I love this show and haven’t missed an episode! Thursday nights are held strictly for “Swamp People”. This is a first for me, ” I even love the re-runs also”.

After watching a few minutes of season 8 swamp people, they should have left it cancelled. I mean, Stringbean, come on people? A floating bicycle? Cancel the rest of the season and don’t bring it back.

I love this show! I’ve always watched because the show isn’t just about alligators, it’s also about family. I love the way the people of Louisiana come together to help each other out. I hope that they do not cancel this great show.

I am so happy that Swamp People renewed another season. I hope that History keeps bringing them back year after year. Swamp People is the best show ever love all the cast.

WTC? Where’s Liz, Junior and others???
Love the Landrys BUT they alone CANNOT make a show!
#bringemback

I never miss an episode. Glad to see one of my favorite shows stayed. This show is one of the only reasons I watch history.

The best show on history channel.

Love this show. Was sad it got cancelled,thrilled you brought it back

I like the Landrys, Willie and Liz but Trapper Joe was my favorite. I hope they bring him back also.

I love the show so much,i was safe when the show was canceled. Glad y’all bac