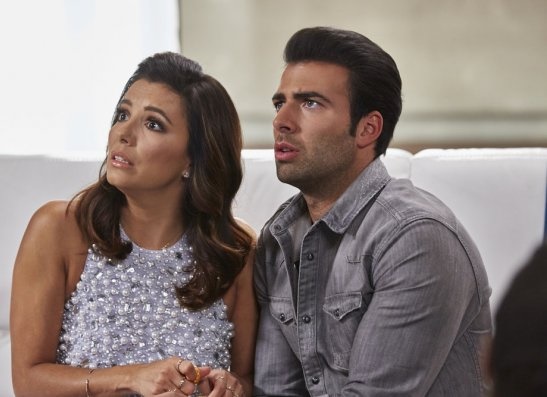 Telenovela will air the finale for its first season later tonight on NBC, and Eva Longoria spoke about the comedy and its chances for a second season in a new interview with TV Insider.

The actress is still hopeful that NBC will pick up the comedy for a season two, but she has not heard anything yet.

“Not yet. But we’re hoping. NBC has been super happy with the ratings and the critical acclaim. They were blown away by all our great reviews. And they’ve been 100 percent supportive from, “Let’s shoot more promos!” to “Hey, let’s name Monday Queens of Comedy Night!” They’ve had great social media ideas and are always thinking about how to help the show. It’s a great vote of confidence.”

If the series is picked up for a second season by NBC, Longoria does have ideas of how to improve the series. She shared some of the changes she has in mind for season two during the interview.

“I think our latter episodes in the season had the right formula, the right balance. But I do want to introduce stronger B stories featuring the other characters. In Season 1 we were heavily dependent on Ana Sofia but I want to branch out and get into the personal lives of her friends and coworkers, learn more about their histories, follow them home.”

Are you a fan of Telenovela? Do you want to see a second season? Tell us what you think.

Just watched all 11 episodes. Adorable. I love all of the characters and hope so much it is renewed.

My best friend and I watched this show religiously!!!! We absolutely love it! It’s our guilty pleasure, we love it so much! Please please please let there be another season!!!!

I LOVE the show, there isn’t an episode I don’t laugh at ! Please let there be another season!!

I absolutely love the show! Its like like the Spanish TV version of 30 Rock. I am really impressed with Eva’s comedic abilities and the character’s really compliment each other. There are a lot of episodes I have to re-watch as I miss a lot of jokes the 1st time.

Please renew the show for season 2!

My teen daughter and I watch it together and absolutely love it! This show MUST continue!!! It’s everything you look for in a witty comedy. My grandmother watched telenovelas and my daughter is studying Spanish in school. This show is creating an evolved family tradition for us! All the characters are perfect! Amazing writing!

LOVE THE SHOW! PLEASE DO NOT CANCEL. ..IT HAS BEEN A LONG TIME TGAT I HAVE LAUGHED OUT LOUD WATCHING TV!!!!

I love, love, LOVE this show. It is silly, and fun, makes me laugh out loud. We need this kind of show. PLEASE renew and allow this team to continue their great show.

I REALLY DO HOPE THEY COME PUT WITH THE SECOND SEASON! i just started watching it two days ago and i already finished the season and i wanna watch what happens! please come out with another season im begging

This is such a great show! Even my husband watches with me! We love all the characters! We were both talking after the season finale like who is she gonna pick Xavi the ex who’s changed? Or James the strong committed man who’s back from his long trip and ready to make things happen? It left us with so many questions!!! RENEW RENEW what else are we going to do on Monday nights?! It’s a family tradition now

I look forward to each episode! I love the cast’s chemistry! Please renew, NBC!

I actually find myself laughing aloud;one of the few comedies to elicit that reaction. Please renew this genuinely funny show.

Telenovela has to continue!!! Such a great hilarious show!

Excellent writing, lots of laughs. We need a second season, Telenovela deserves to be renewed!