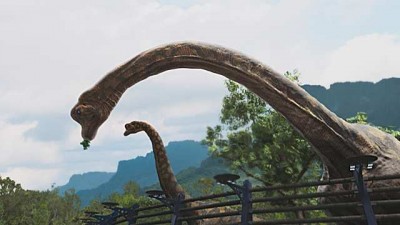 THANK GOSH! I hope it doesn’t get picked up by another network!

It was an awesome show and I’m sad now

I watched the season of Terra Nova, but enjoyed it less and less as the season drew on. The older kids really irritated me and I was hoping one or both would be eaten by the dinos. Some of the other cast members too could have been chowed up as well and not missed. I don’t think it lived up to its premise.
Perhaps this is better news for Fringe and Alcatraz, both of which I enjoy more.

It’s a shame that when a good show comes on, it then gets cancelled just because….I never missed and episode and love the graphics. Hopefully it will be picked up by another channel. Good luck.

Better chances for ‘Fringe’ to be picked for season 5. The cancellation of Terra Nova is certainly a good news. I watched first seven episodes but I had to fast forward it. First time I layed my hands on Fringe season 1 and 2, I didn’t leave my house for 3 days straight. I never got so hooked up on a tv serie. Fringe is like crack, tho I’ve never tried the latter, but I assume 🙂 JJ Abrams said that he has a story plots to run Fringe even for 8 seasons. I certainly hope it would be so… Read more »

Mabey SYFY will pick it up like they did Merlin no one thought Merlin was going to make it and were on the 4th season now. come on SYFY pick up Terra Nova

I loved this show, and as for the budget most of the highly expensive costs were already out of the way, so I sincerely doubt it was a per episode cost but an amortized per episode cost (and lets face it they did allot more than they had to to try and get the wow factor going). Also people should realize something… these numbers blow the majority of Battlestar Galactiaca’s nubers out of the water (Just like Flash Forward did) and that a large number of the viewers ot these types of shows in the words of Jamie Bamber are… Read more »

I watched the show each week, and really liked it. I guess Fox is once again doing their usual thing – cancelling yet ANOTHER series. That seems to be their thing. Get people hooked on a series than WHAM! take it away. Thanks Fox!

Good job FOX on cancelling a show that was not the same old run of the mill show. It was getting kids interested in dinosaurs again. The show was best thing on TV for all ages, young and old. Bring it back!!!

Just like Firefly. Fox cancels by mid-season. Reality Shows, Singer and Dance parades, and crap like them continues.

Well yes I’m disappointed, because this is what they canceled three great shows for. This was supposed to take off, but nope, it didn’t. Now they cancel? Wow, Fox You… suck.

I am saddened by this bad decision. I guess we can’t expect more from them. I showed the series all the love I could but no luck. I hope it finds some love elseware.

I Tivo’d the whole season and haven’t yet watched cuz it seemed like one that was likely to fail (at least on Fox). Now if it was on SyFy………