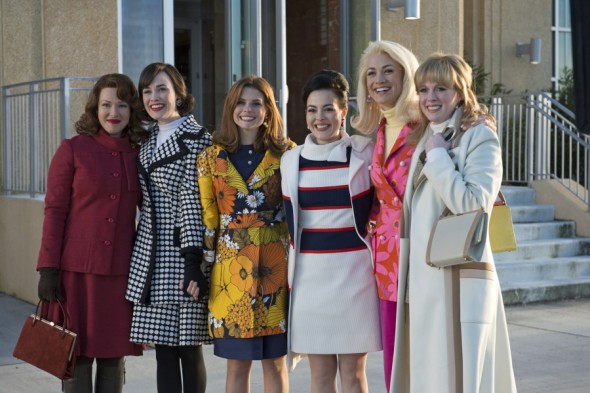 Tonight marks the end of The Astronaut Wives Club TV show on ABC — at least for now. The network has yet to officially cancel or renew the series for a second season. How’s the show done in the ratings? Should it come back or did tonight’s finale properly end the series?

The show debuted in mid-June to a 1.1 rating in the 18-49 demographic with 5.51 million viewers. That was a mediocre start. The demo was pretty low but total viewership wasn’t bad for a summer series.

Unfortunately, both the demo and general viewership took a big tumble in week two — and the numbers fell much lower as the season progressed. Last week’s installment matched a series low in the demo (a 0.6 rating) and hit a new low in viewership with 3.2 million.

Looking at the network’s summer ratings, Astronaut Wives Club has been performing about the same as their other scripted fare — The Whispers, Mistresses, and Rookie Blue. None of them have been doing very well but the network needs some scripted shows to air during the summer months.

Based on the ratings, it seems like ABC should cancel Astronaut Wives Club and let the story end with tonight’s finale. However, they certainly could decide that it’s worth give a second round next summer.

But, what do you think? Do you like The Astronaut Wives Club TV show on ABC? If you ran the network, would you cancel it or renew it for a second season? Was tonight’s finale a satisfying conclusion to the series?

There was never going to be a season two. I saw Joanna Garcia Swisher interviewed towards the beginning of the season and she confirmed it was a mini-series. I think ABC didn’t advertise it that way as a ratings ploy since it was paired with a continuing show Mistresses.

I loved the show as well all my friends. We are hoping it will be renewed again soon.

Keep it on. One of the better scripted shows. Tired of all the reality shows.