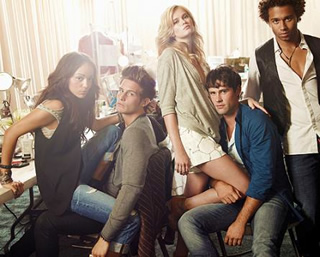 Well, that didn’t take long. The CW network has cancelled their new drama, The Beautiful Life, after just two airings.

The series debuted last Wednesday to just 1.46 million viewers and a 0.7/2 rating/share in the 18-49 demographic. That put the premiere in last place for the hour and also represented a loss of almost 50% of the audience from lead-in America’s Next Top Model.

This week, the ratings for the second episode came in even lower. Beautiful Life drew only 1.09 million people and a terrible 0.5/1 in the targeted demographic. That represents a 60% loss of the lead-in audience. It was also beaten by a repeat of Magic’s Biggest Secrets Revealed on My Network TV.

To little surprise, the CW network has decided to cut their losses and cancel the drama. They’ve pulled it from the schedule effective immediately and production was shut down earlier today. According to THR, the cast and crew were in the midst of filming the seventh episode. The drama is the latest in a line series that have been paired with Top Model and failed.

For the immediate future, the network will try to generate more interest in struggling freshman series Melrose Place by airing repeats in Beautiful Life’s timeslot.

What do you think? Should the show have been cancelled? Is the series not worth watching or did the network miss an opportunity to make it work?

WHAT?!!!!!!! Im sooo unhappy! i love drama and fashion! it was such a good mix and i was really excited to see what happens next! give it a chance

I acualluly liked it. It was in my top 5 that I couldn’t miss. I am mad that they took it off. I wonder if they will ever put it back on or make it better and re-air it. I really was looking forward to seeing what was going to happen next. It isn’t like it took up space. So what if it didn’t take off like the other shows they should of gave it more time. Just like how they took off Priviledged. I liked that show also. I disagree with their decision.

I am so sad to hear this show has been pulled. I found it to be far more original than lame Melorose Place and was completely hooked after the first airing. It was sooo good! PLEASE bring it back!!

It was a good show I don’t think they should have cancelled it because people would watch it.

Are they crazy they should have place the show back on air thata is ridculous i love that show so much! =/ ugh! put bacl on air!~!!!!!!! now !

they didnt promote it enough, no one knew what it was or when it was on
it was a good show they didnt even give it a chance

I really liked the show and had it set to record so that I wouldn’t miss it. I was disappointed when the Melrose Place Encore was recorded instead. I was hoping it was just a one week thing and that it would be back on the next week. Again, disappointment. Since I watched it the first 2 weeks and then set it to record, I thought maybe I had the wrong channel or time set so I was investigating it online and found this page today. I like most of the CW shows and am shocked that they didn’t give… Read more »

I was really upset when there was no episode the third week…. I was thinking maybe they were taking a break for two weeks, but by this week I decided to do some investigating. It takes me a while to get hooked on shows, but this show had me from the first episode. I highly recommend CW to bring this amazing show back… I am really interested to find out what happens next.

they should try running it again during the spring with a different show. I really liked it and it sucks that they only gave us two episodes

I thought it was a pretty good show. The C.W sure doesnt give a lot of time they should really consider that it takes a viewer a while to get in transition of new shows!!!

I seriously can NOT believe this show was cancelled. I lead a busy schedule, which barely even leaves time for me to Tivo my favorite shows. I have not turned on the TV in a few weeks, and the last thing I watched was TBL. I fired up my Tivo the other day anticipating an AMAZING episode of TBL that I could watch while I had a spare hour, and much to my disdain it was not on my list of recorded shows. I was beyond upset that the CW would go as far as cancelling the series so early… Read more »

there just wasnt enough scanfal in the first 2 eoisodes to really get anyone hooked on it . i think it had the potential to be a good show, but it wasnt promoted well with enough juicy-ness . people watch gossip girl and desperate housewives and 90210 because there is a lot going on, everything is scandolous . and The Beautiful Life wasnt promoted like that, and the first 2 episodes were NOT that captivating with gossip and scandal .

that was an very great show and im upset that they cancelled it, although i didnt get to catch when it actually showed i DVRd the show and thought my DVR was broken when it didnt show after the second episode!