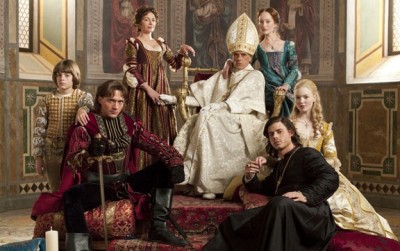 TV show description:
Set in 15th century Italy at the height of the Renaissance, this history-based TV series chronicles the corrupt rise of patriarch Rodrigo Borgia (Jeremy Irons) to the papacy, following the death of Pope Innocent VIII. Once in power, Rodrigo proceeds to commit every sin imaginable to amass and retain power, influence, and enormous wealth for himself and his family.

Aiding him in his endeavors are his two sons, Cesare (Francois Arnaud) and Juan (David Oakes). Cesare was forced into the priesthood by his father and yearns to be released from it. Unlike what one might expect from a priest, Cesare is violent, cavalier, and a master schemer. He serves as his father’s Consigliore and carries out the most heinous crimes to advance the family’s cause. He’s often aided by Micheletto (Sean Harris), a low-key but incredibly devoted, cold, and dangerous assassin. Cesare is well-aware of his brother Juan’s faults and believes that he is his father’s favorite.

Juan is a feckless dilettante whom Rodrigo appoints to head the papal armies. He’s filled with swagger and bravado, but in reality is a hopelessly inept coward. More interested in the brothels and taverns of Rome than with defending his family, Juan resents that his brother Cesare is the more apt warrior son.

Daughter Lucrezia (Holliday Grainger) and son Joffre (Aidan Alexander) are married off in early adolescence to members of powerful rival families -– pawns in their family’s fortunes. Lucrezia is a beautiful young girl who is wise beyond her years and the apple of both her father’s and brother Cesare’s eyes. Though she appears to be the the picture of innocence, she has learned much from her her brother and father. Joffre is barely pubescent when he is married off to Sancia of Naples (Emmanuelle Chriqui), a lusty beauty who quickly captures the attention of Joffre’s brother Juan.

Waging their own heated contest for Rodrigo’s affections are Vanozza (Joanne Whalley), his long-time mistress and mother of his children, and the younger Giulia Farnese (Lotte Verbeek), whose cunning is matched only by her astonishing beauty.

Naturally, Rodrigo has many enemies outside of his house as well. The most devoted of these is rich and powerful Cardinal Della Rovere (Colm Feore), Rodrigo’s chief rival for the papacy. When Della loses, he devotes himself to unseating the Pope, whom he sees as lewd, blasphemous, and his vast moral inferior. He becomes so obsessed with his quest that he ends up stooping to the Borgias’ level — and beyond — to achieve his goal.

Series Finale:
Episode #29 — The Prince
Alexander and Cesare are reconciled at last. The Papal Armies have been fortified with the money saved from the Crusade and the proceeds of the Jubilee. Cesare marches his fearsome army to finish what Juan started — lay siege to Forli. Micheletto reappears. Following a scuffle with Cesare, a drunken Alfonso is near death and Lucrezia turns to her potions to end his life painlessly. Cesare vows that Lucrezia will now be his for good.
First aired: June 16, 2013

What do you think? Do you like The Borgias TV series? Are you sorry that the show won’t have a fourth season?

you will be missed the costumes and acting Iv watched over and over looking forward to the 4th season,

this is without a dought the best show on t.v. i read a head there is so much more to tell.

It would seem, since the third season just came out on video, that the video portion of the market hasn’t been counted toward the measure of The Borgias popularity (we only watch videos). In any case, It is understandable why it can not continue, as Alexander would be dead soon after the events of the final episode. I will say that, while the entire production was magnificent, it was the fabulous performance of Jeremy Irons, the costumes, the sets, and especially the lighting that made it a masterpiece. (Regarding the latter, we had to pause every few minutes to marvel… Read more »

I hope this will help to bring this back.. I loved the show

What a great dissapointment it is to see this show end on season 3. Awesome acting, suspenseful, beautiful constumes, great plots. Now just leaving us hanging. This is a great show. To bad the producers can’t see that.

The Borgias…complex, historical, great acting, deep plots. Too much for the general populace to absorb. Oh well, another classic goes down the tube!

Did Showtime hire an NBC executive to make the decisions on cancellations and renewal of series or producti0ns? t certainly appears so.

If the 4th year has been performed please put it on sale in DVD form.

The showtime decision is the equivalent to Xerox with respect to the computer! A new executive feeling his oats.

Say it isn’t so. No! Please renew my favorite, the Borgias.

I am going to stop watching TC. Any show I really like always gets cancelled. This was a great show, great acting, and deserves another season to bring it to a proper ending.

I cannot believe the series has been cancelled. It was one of the best on television and I really looked forward to the next episode. The plot, acting and historical background were amazing and the finale was really disappointing to say the least.

I too loved the Borgias, so did my daughters. The actors were physically beautiful, the acting was fantastic, the story was captivating, and I love to watch the episodes over and over. I am very disappointed that the series will not be completed. What happened to Katarina? What happened to Micheletto, did he die of his broken heart? What happened to the big plans of establishing a kingdom for the Borgias? I know the history, but I enjoyed the way the story was being told. Ceseare was not simply a ruthless killer motivated by greed and lust for power. Rodrigo… Read more »

I feel the same as you. The real Rodrigo Borgia, Pope Alexander, died in 1503. The show took us past 1500. I had hoped they would finish at that.
There are great Wikipedia pieces on many of the real Borgias, and Micheletto, who was a renowned assassin in real life.

I do not understand why such a successful and compelling drama has been cancelled. The final episode seemed to be a premature ending. The Borgias was one of the best series I have watched. It was of the highest quality. The acting was truly superb. This is a loss and a foolish decision.