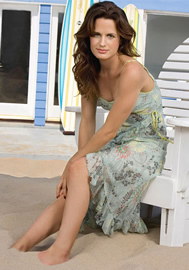 I really enjoyed this show and thought that the concept was right on target. Wished we could have known which guy she was going to choose in the end. I was so disappointed to see that it was canceled. Like the other fans on here, I hope they bring it back or at least let us see what the ending episode would have been like. I usually don’t like these kind of shows, but I loved this.

Loved this show and OB! I hope that CBS at least allows the show to go to DVD so we can watch the other 7 shows. Just a thought….or even better, maybe a cable network could pick it up. It would be a great show after The Starter Wife on USA network. I am really gravitating towards cable since they give shows more time to grow their audience. I do not know how much CBS I will be watching now….I at least will not try any new shows next time one comes out.

BUMMER…. I would love to see who she ends up with! Can we just skip to the end!

Guess CBS should’ve stuck with Moonlight, which was actually a GOOD show!!!

I need closure!!!! I hate it when they start a show and do not finish it. I loved this show the concept was a good one. Not all shows are a hit in the first couple episodes. Now what so those of us do that enjoyed the light hearted comedy on Friday night. Thanks alot CBS!!!

The Ex List was a great show. I think it was a bad idea to shut it down. My god, just give it a chance. Everything can’t be a hit right away. Put it back on the air. Hopefully another station will pick it up and give the show a chance. CBS Sucks for doing that!!!

BOO!! Cancelling this show was a bad idea. I had the same sad feeling when ABC cancelled Men in Trees, only CBS didn’t even give us a chance to get to know Bella like we did Marin. Sometimes, girls just need a sappy, cheesy “chick-flick” type of series. C’mon now people!

I am upset! I really liked that show!! It was such a cute storyline! I really hope it comes back on. Way to leave me hanging! I want to know if she gets back with the guy she shares the dog with?

Wow. I am so bummed!!! I usually work late on fridays so I wasn’t able to watch it then but come saturday… I have been looking for it online and then this, so lame!!! I think it definitely would have picked up more viewers had it been given more time… I hope they at least have the consideration to view the rest of the season instead of just leaving us hanging. Anyhow I wish Bella (or rather the actress who plays her) luck I loved her on Gray’s to as Ava. Here’s hoping the honchos read message boards like these… Read more »

I loved the ex list too. I didn’t think the show was on at a great time as I know I (and many people that I know) are busy on Fridays. I searched to find the shows online so I could catch up and then saw this. Sad. I would love to know what happens to Bella.

I officially hate cbs. I loved the Ex list.

i am really upset that they cancelled the ex list… i had been looking forward to watching it since i saw the previews.. and when i finally watched it i was hooked after the first episode… i had to dvr them because i was working.. but i still watched them.. and the past 2 weeks.. i have come home to watch them.. and well it wasnt recorded.. and i thought that my DVR was just acting up.. and then i just read on here it was cancelled.. i thought it was a good show.. and they could have at least… Read more »

I cannot believe that CBS has cancelled this fantastic show! It is the only new series this season that immediately captivated me. The concept was great, and I thought the characters were interesting and the plot lines were attention grabbing. It’s a shame that when a really good show comes out, it gets axed if the viewership is not tremendous from the get-go. Please reconsider the decision to cancel the Ex-List. I’m sure I’m not alone in my request.

It’s the only NEW show this year I actually watched each week. I had to TIVO it usually, but I did watch it.

BRING IT BACK. It didn’t even have time to develop a following.. That takes time and word of mouth from fans like us.