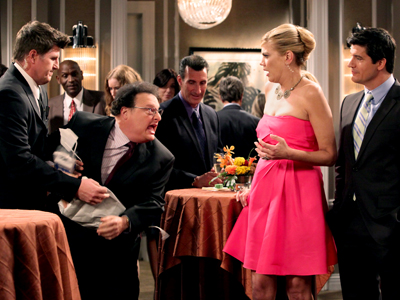 This week marks the end of the second season of The Exes on TV Land. How’s the show been performing? Will it be cancelled or renewed for a third season?

Compared to last season, the series has performed about as well in the demo but has fallen by 23% in viewership.

When stacked against TV Land’s other original sitcoms, The Exes is one of the lower-rated shows of the bunch but isn’t doing that much worse. The cable channel also seems devoted to growing their slate of original comedies and to date hasn’t cancelled any of them (though that may change with Retired at 35).

The Exes’ fate could go either way but I suspect that it’ll end up getting renewed for a third season.

But, what do you think? Are you a fan of The Exes? Do you think it should be cancelled or renewed for another season?

One of the best and funniest sitcoms!! Hats off to the writers and producers! Please do not cancel…

Please. renew love the show so sick of all the reality show finally there is a good show to watch

My whole family loves the exes. This is one of the funniest sitcoms i have seen in anlong time. Can’t wait for the new season. I agree; quit showing reruns from the 70’s and show some of the newer shows.

I think the show is very funny and should last another year at least.
There are other shows tht should go before this one.

The Exes is the funniest original series, don’t know why the ratings are low, I get tired the channel keep changing the tv lineup all the time, I really don’t wanna watch the cosby show or golden girls. I love King of Queens, Raymond, That 70s show, Home Improvement, etc…..

Jerry you hit the head of the nail on that one. I absolutey feel the same way. I really dont care to watch cosby show or golden girls. I love all the shows you mentioned.

i love this show the exes.. please don’t cancel it.. it is sooooooooo funny……………. thanks.

Please don’t cancel this show is one my favorites. Is funny bunch

Please renew I love this show….I’m a big fan..

I love this show, please re new for another season. It is funny as hell.

Please, Please, Please bring The Exes back. It is one of the “Funniest” sitcoms on TV. I don’t have many faves by way of sitcoms and by taking this one it just takes away my viewership. Please TVLand??? You guys struck gold with these originals and it takes the majority of us back to the days when sitcoms were funny and worth watching.

I really am not a sitcom person, but this show is so funny. Something that most sitcoms on the other networks that we run into aren’t. I think the time slot is pretty late. The only reason I even saw it, was I had the day off and got a rerun during the day. This show needs to be on earlier to give it more of a chance. Than maybe it won’t even be considered being cancelled and give more people a chance to view it. Please don’t cancel this show.

Love the show and everything about it please do not cancel!

PLEASE! Don’t Cancel, they are the funniest group. My husband, daughter and I love that show, it just comes on so late. It is the best grown up show and the cast is excellent!