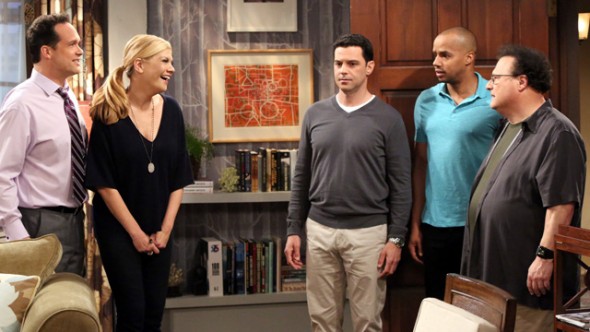 It seems that TV Land is committed to saying goodbye to their multi-camera comedies. The cable channel recently renewed The Soul Man for a fifth and final season and now The Exes, their only other traditional sitcom, has been cancelled.

Johnston broke the news of the cancellation on Twitter:

Ok, I'll stop endlessly RTing @The_Exes tweets soon. Honestly, we all knew it was a probability. The last 6 are the best yet.

And, from the president of TV Land:

@tvlandlarry love you Larry. I already told you this, but you're the best boss I ever had

The ratings for The Exes have come way down over the years. The first season averaged a 0.27 rating in the 18-49 demographic with 1.18 million viewers. The current fourth season has been averaging a 0.13 rating with 560,000 viewers — about the same as one of TV Land’s new comedies, Impastor.

What do you think? Do you like The Exes TV show? Do you think it should have been cancelled or renewed for a fifth season.

Bring the EXES BACK PLEASE!!!

So sad this show was cancelled; honestly this one of my favorite shows!! I looked forward to it EVERY week. The show was fresh & unique in its setting (four exes). I enjoyed watching every single actor especially “Holly” and the “little sexy one” (forgot her name).

Guess I will just watch the reruns on TVLand. Please bring the show back???!!

I’m really sad to see this comedy go. I just started it a little while ago, and have binged watched it over the past 2 weeks. 🙁 What originally drew me to it was because of the 2 same actors from 3rd Rock from the Sun, Sally & Don 🙂 and there characters where just as funny in this show….Hey maybe Netflix will pick it up???…you never know. Any way rant complete..for now.

I posted this further down, but I start I’d do a new discussion thread for anyone who might be interested. From what I’ve heard, the only reason they are giving about dumping most of their comedies is that they are dumping their 3 camera comedies. What???? The number of cameras is not what makes a show funny or not. It is the COMEDY. Most of those shows, The Exes, Hot In Cleveland and Soul Man were very funny and still going strong. Much better than Younger, which they are really promoting.

I no longer have a reason to watch the TV Land channel. Everything fresh is now gone.

They still show the greatest TV show in the history of TV ….. The Andy Griffith Show!! Also, during the day, they show the two greatest westerns ever, Bonanza and Gunsmoke. For the new stuff, they suck anyway! Just like everyone else.

Terrible decision by TV Land.. Cast worked so well together.
It’s all about the $$$$$.