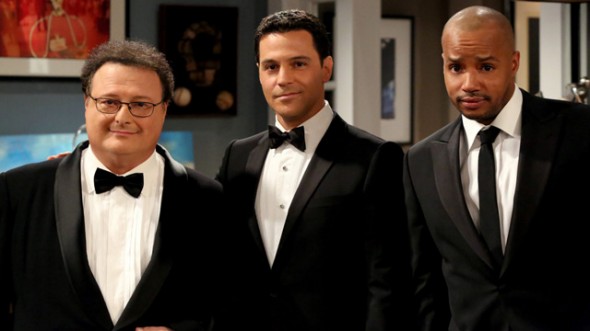 TV Land has picked up The Exes for a fourth season. They’ve ordered just 12 episodes this time around, down from the current season’s 20 episode order.

The second half of season three started airing on December 11th and will wrap up on February 26th.

New York, NY – February 3, 2014 – TV Land has picked up its hit original series “The Exes” for a 12-episode fourth season, it was announced today by TV Land President, Larry W. Jones. The series stars critically-acclaimed actors, Donald Faison (“Scrubs”), Wayne Knight (“Seinfeld”), David Alan Basche (“The Starter Wife”), Kelly Stables (“Two and a Half Men”) and Kristen Johnston (“3rd Rock From The Sun”), with Leah Remini (“The King of Queens”) featured in several of the episodes in season three. The show currently airs on TV Land every Wednesday at 10pm ET/PT with the season finale scheduled for February 26. Season four will debut this summer.

“From the moment we read the very first script for ‘The Exes,’ we fell in love,” said Jones. “This series has a comedy ensemble that’s a force to be reckoned with, and it just keeps getting better and better.”

“The Exes” revolves around the unlikely trio of Phil (Faison), Haskell (Knight) and Stuart (Basche), three roommates and divorcés who have finally found bromance after initially being forced to live together by their divorce attorney and landlord, Holly (Johnston). Most recently, Leah Remini (“The King of Queens”) joined the sitcom in a recurring role, appearing in seven of the 10 episodes this season as Nicki, a tough talking, no-nonsense woman from Staten Island. After discovering that her husband had an affair, she retreats to Manhattan, seeking comfort from her brother Stuart and integrating herself into the lives of his friends.

What do you think? Do you like The Exes? How does it compare to the other TV Land sitcoms?

I think it’s sooooo funny – such a great show!!! And has the best cast members ever. Can’t wait for the fourth season to start. Please keep it on the air.

Its just sheer magic. But why only 12 new episodes ? Are you mad, you have TV heaven here with this

The Exes is a really great show that should be brought back on the air! Agree with some comments that Leah Remini is not right for the show. Fortunately, I DVR’d most of the episodes and watch them often. Please bring the show back soon!

I love this show. Lose the gal from King Of Queens as she is taking it down! But leave the show on…please!!!

Love the show, best comedy. I look forward to the next season. Please keep this show on,

I Love the Exes!!!… Can’t wait for the new episodes. I also love andy Griffith show with Barney Fife!! Please bring back!!!

Love The Exes. Please keep them coming. Where’s Kirstie? Together they are a great block for TVLand.

Love the Exes, thought it was canceled but I hope not and I think Leah Remini is great in any thing and a fine actress. Hope she stays on the show!

love the show,please keep it on!!!

I will have to agree with the 2 previous comments about Leah Remini she is not a fit for the Exes the show was and is better without her.
She is annoying and she is not a macth for Kristen Johnston

I totally agree with you all that Leah Remini is definitely no match for Kristen Johnson. Meanwhile, I love love love THE EXES ! … What with 3 funny gorgeous guys and awesome Holly to make me laugh the minute the show starts ! They make my night and light up my day ! Every nite, I’ll wait up for 10 pm for them on cable and a repeat at 3pm the next day. Can’t live without this sitcom !

I love the Exes!! It’s one of my favorite shows! I think you need to lose Leah Remini though! She was great on King Of Queens….but just not right on The Exes! They have a great cast without her! I’m looking forward to the new season that starts this summer! Thanks TV Land for all the great shows! I love Hot In Cleveland!! I also love Soul Man! Your station rocks!!

Love anything with Leah Remini in it! The show was great but now even better!